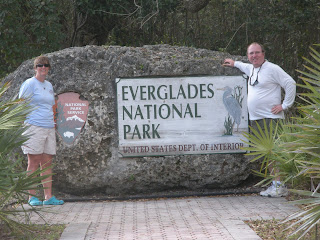 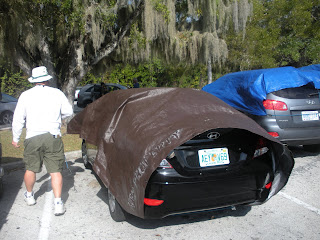 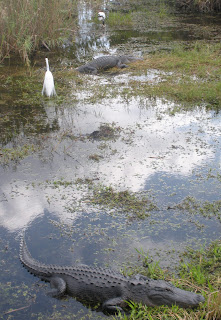 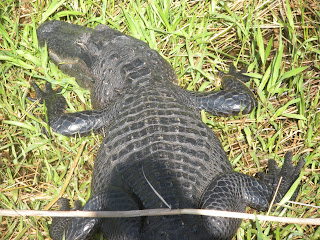 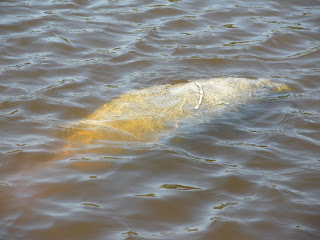 Before heading back to Stuart, the Captain and I decided to make a stop at the Everglades. On arrival at the parking lot, interestingly enough, visitors are encouraged to wrap their cars in a tarp which is provided by the Ranger station. The tarps are handy in preventing, not alligators, but the vultures from scratching and pecking at the paint job on your vehicle. Hmmmmm.
With the car wrapped we headed down the trail and got very excited when we spied an 18 inch alligator. What we didn't realize is as you continue down the trail the foliage grows denser and denser and the wildlife grow bigger and bigger. So by the time we reached the interior section of the trail we were spotting plenty of 5 foot + gators, ducks, various birds and of course, vultures. Very cool!
From there we took the road south towards the bay and the Flamingo Visitor Center. There we were able to see two crocodiles and yes - wait for it - two of the ever elusive manatee. Pictured is a shot of the baby manatee. Unfortunately his/her back is scarred with propeller markings. (Christopher, I still remain awed by the manatee photo you got while in the bay.)
Heading back north towards the north gate of the park we stopped at several of the trailheads along the way enjoy the varying terrain of the park -plains, mangroves, forest - quite amazing.
Once outside the park we spotted a produce stand and decided to stop and see if they had any interesting munchies. The lot outside the stand had lots of cars, but it didn't prepare us for the mass of people inside. The produce looked great but the most popular offering appeared to be the fruit milkshakes they offered. We decided to splurge and have one. Once we placed out order - #41 - we were told they were currently serving #4. Holy cow. No wonder the crush of people! Despite the wait, we were lucky when we arrived when we did because not long after placing our order a long line began forming to take orders for milkshakes. As we watched the crowd build we could only imagine that this was going to be a mighty fine milkshake.
And it was!!! A papaya key lime milkshake. Excellent choice and worth the wait. But it was time to head back to Stuart, return the car and get back into our normal routine. But you know us, normal isn't so normal. So just wait until you find out some of the interesting new activities we've added to the schedule.
The Admiral
Posted by Captain Dave and Admiral Joanne at 11:05 AM No comments: 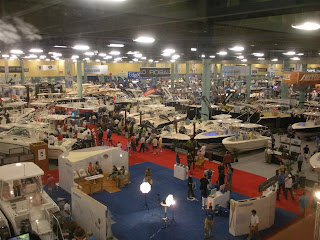 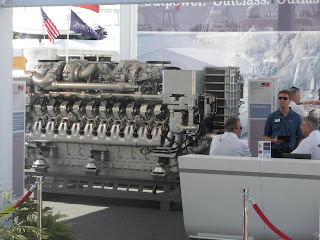 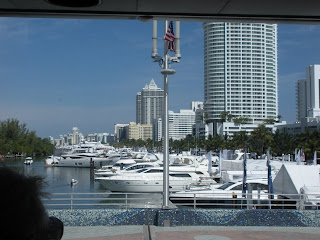 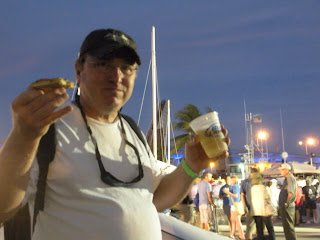 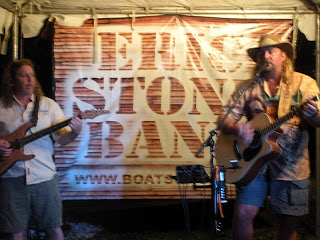 The Captain is back so how to celebrate? We headed to the Miami Boat Show, of course. Where else to have a romantic late Valentine's Day celebration other than messing about the boats. Big boats. Small boats. Fast boats. Slow boats. You name it they had it.


Our two days of fun started at the powerboat venue where we messed about the small stuff - that would be the less that 45 foot boats. From there we built up the courage to tackle the convention center. Oh my! I can't even describe it. And the photo does no justice. Try to think of the indoor photo above and multiple it by 4. That would give you a good perspective of the main floor. From there you still need to explore the Big Game area, the upstairs vendor area, the Electronics room and then the downstairs vendor area. Tired yet? I hope not, because once you've done aaaallllll that there is still the outside boats and vendor tents to explore. After 9 hours we were exhausted and decided to tackle the remainder of the convention center on day two. But before I move on, make sure you check out that small engine in photo 2. It's the one that is bigger than the guys standing next to it.

Moving on. So day two began at the Yacht and Brokerage show. This was where the bigger stuff was. Most of it so big that we didn't even bother to get on board for fear we would get lost on board and not find our way back to the deck until the boats stopped in Antigua for fuel. (Wouldn't that be tough.) Beyond the boats, it was a great spot to check out Miami Beach and all the cool hotels. From there it was back to the convention center to finish up there. Then a mad dash to the sailboat venue to check out the latest in sailing multihulls. We stayed until the sailboat venue closed and then took in the Latitudes and Attitudes party. Its the only party I know of where the beer is free and the Cola is $3 a bottle. Imagine that. We enjoyed the pizza and listened to the Eric Stone band but by 9pm we were wiped out. Thank heaven it was boater's midnight and the party was winding down anyway.

All in all a very cool couple of days. Just a word of warning. If you decide to check out next year's Miami Boat show and want to tackle all the venues in detail, plan at least 3 days.

But hey, the wild weekend isn't over yet. Stay tuned for more.


Posted by Captain Dave and Admiral Joanne at 9:56 AM No comments: 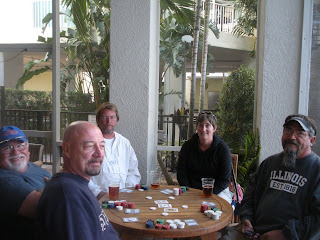 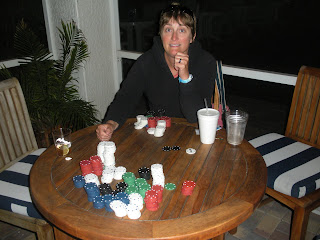 Dave is still in the midwest, but expected home today. It will be great to have him back!!! If you've been wondering what I've been up to ....... well ......... I've gotten into a bit of mischief - as you'd expect. My new routine includes coffee in the Captain's lounge at 7am. Card play until 9am. Aqua aerobics 3 days a week beginning at 9:30am. In the evenings there is always a social gathering somewhere......

Last Saturday night we had the first, of a new weekly, poker game. I learned how to play Texas Hold 'Em at coffee Saturday morning and then proceeded to be crowned poker champ Saturday night - Girl power!!! 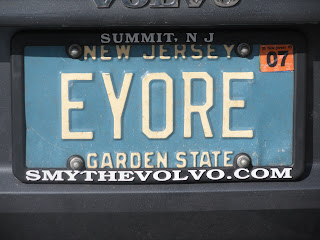 P.S. I thought some of you might enjoy this license plate photo.....
Posted by Captain Dave and Admiral Joanne at 9:12 AM 4 comments:

Dave's Dad is through surgery and doing well. The doctor says he could be released as early as tomorrow!

The Admiral
Posted by Captain Dave and Admiral Joanne at 11:11 AM 2 comments:

There and Back Again... 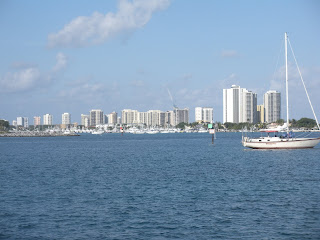 On a beautiful Wednesday morning we finally decided we had no excuses to remain at the dock and opted to drop the lines and head south to Lake Worth. Twenty six miles, seven bridges (most of them timed) and 7.5 hours later we arrived at an anchorage just south of Peanut Island. A day with lots of bridges is always a challenge so we were ready to kick back and relax a bit. Not to be.

Around 6:30pm we received an urgent message from back home. Dave's Dad was being hospitalized. It would take most of the night, but in the weee hours of the morning another call would confirm our suspicions that his gallbladder was reeking havoc on his system causing a whole host of issues.

Now what? We couldn't believe our dreadful luck. We'd been tied to the dock in Stuart for a month and less than 12 hours after setting our sights southbound 'stuff' happens. We aren't very familiar with the Lake Worth/Palm Beach area so we opted to do the only thing that made sense to us; we headed back north to Stuart. After a relatively sleepless night, we hoisted the anchor before sunrise and started the journey. We were not looking forward to all the bridges, but remarkably we made them all, clearing the last timed bridge at a very purposefully planned 7:30am in hopes that we would beat any work crews. On arriving back at Loggerhead, everyone was waiting at the dock to take our lines. We were able to quickly get the boat secured, book a flight for the Captain and get him back to the midwest.

The good news is that a minor surgery on Thursday was able to address the immediate issues to Dave's Dad's health. An additional surgery is planned for Monday to remove the gallbladder and hopefully stop these attacks for good.

Huge hugs and thanks go out to the members of the boating community who came to our rescue on Thursday including the staff at Loggerhead Marina, Susan and Eldon on Soteria and Dave and Linda on Chimo II. We couldn't have gotten the Captain home so quickly without your help!

The Admiral
Posted by Captain Dave and Admiral Joanne at 6:54 AM No comments: