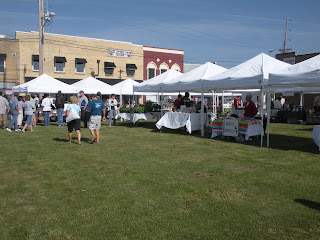 Over 900 miles of the ICW awaited us. Ugh. I know that sounds terrible, but it is true. The Captain and I have grown weary of the ICW. I know many of you aspire to travel it one day and when that opportunity occurs seize it and go, but for us after several trips up and down it is merely a highway.

Fortunately there are alternatives and one of those is to bypass the ICW and hop to Atlantic waters. We opted for just that and departed Fort Pierce bound for Beaufort, NC. It would be our most ambitious offshore sail ever but we were motivated by the knowledge that we'd be traveling the with the gulf stream.

So off we went. Day 1 met us with light breezes - too light actually. Yet we traveled along. By nightfall the first day, the winds began to pick up and pick up and pick up. Shortly after sunset we found ourselves reefing the main in an effort to slow ourselves down. Sure we love to travel fast but sometimes on a boat there is a sense of too fast and we had found it. I can only equate it to that out of control feeling you get riding a bike down a really steep hill when you realize you are at the mercy of the bike and the road ahead. Despite the reef in the main, we continued to move and quickly put a first and then a second reef in the jib. Even with all the reefing we were cruising along at 9-10 knots in near darkness - just a sliver of moon above.

We welcomed sunrise on day 2. While all that we could see was ocean, it was still wonderful to see our surroundings. By this time we were well within powerful force of the gulf stream. We anticipated 2-3 knots of favorable current to assist our travels and were surprised that we were pushed an additional 4-5 knots as the current pushed northward. We maintained the reefs in the sails, but the wind and water pushed us 11+ knots throughout the morning making quick work of our journey. Unfortunately the wind and the stream would not last. By the afternoon the wind began to subside and the current began to move eastward of our position. We slowed down considerable - actually it felt like we'd stopped - especially given the speeds we'd been traveling earlier in the day. We opted to turn over the port engine to do some motorsailing and were surprised that the engine purred but provided no propulsion - BIG UGH! What could be wrong?!

We brainstormed what could be wrong and the only thing we could come up with was that we'd lost a propeller. We eventually slowed down the boat so the Captain could stick his head overboard with a mask and snorkel. Yep - no propeller. Well thank heaven for twin engines. Nonetheless, we felt vulnerable with a single engine and were anxious to get into shore. We were making excellent progress and would reach Beaufort at about sunrise.

At nightfall, I'd told the Captain I expected it to be a quiet evening with little commercial traffic. Afterall, we were between two channels sailing a course that should be north of the shipping lanes. I can't believe how wrong I could have been. In the late night darkness we heard a broadcast over the VHF. A Navy warship was in the area and would be conducting firing practice. Based on the ships coordinates we were well out harms way - but close enough to hear the booms that resonated from the guns. As the evening to continued to unfold, we continued to hear the firing practice but also began to see lights skirting at high speeds across the water. It was nothing short of weird. We decided to hail the Navy warship to see if our courses were converging. We shared coordinates and confirmed that we were well away from eachother. Then the radio operator on the warship said something that REALLY got our attention, "perhaps it is one of the other ships in our entourage." Dave and I looked at each other - other ships??? We turned on the radar and we shocked to see that we were essentially surrounded by 10-15 vessels most traveling the waters in darkness. So much for a quiet evening of sailing!

Just as expected, the lights of the Beaufort channel began to emerge. We would reach the channel at sunrise and what luck we'd also catch the tidal change and get a push upstream. By the time we reached Beaufort, our adrenaline had kicked in. We intended to stop and sleep, but neither of us could. Instead we continued to move and would put 50 more miles behind us before dropping the hook for the day.

Two hundred miles to go....just two hundred. We continued to worry about having lost the propeller. Why was it lost? Could we lose the other? Then what would we do? This anxiety pushed us ahead. Our only shore stop would be Elizabeth City where we'd arrive just in time for their first Farmers Market of the season - a sure sign of spring! The market was great. We stocked with some much needed fruits and veggies, picked up a homemade peach cobbler and even found some fresh cheese. Yum. We'd also find old friends. Steve and Jean on Suncat would travel the rest of the way with us.

Despite our rush, we had fun. We stopped at the NC Visitor Center one evening. We saw Robert, Lockmaster at the Deep Creek lock, and was able to deliver the conch shells we'd collected for him in the Bahamas. Eventually we made it to the marina. Mark and Alice on Greylag were there to welcome us. Jim, Kathy and four legged Murphy from Charm arrived shortly thereafter with champagne to celebrate our arrival.

The sailing season was ended. All that remained was the haul and tear down. What a marvelous season it had been. We really couldn't have asked for more. Yet we would be blessed one more time this journey. On haulout, we discovered why the prop fell off. The locking nut had broken off - a mechanical failure. Dave called the manufacturer and they graciously agreed to replace the propeller. How wonderful!

So this will be our last post for the season. We hope you drop back in this fall to join us for another season on Tropical Breeze. In the meantime, have a wonderful spring and an even better summer.


Posted by Captain Dave and Admiral Joanne at 11:48 AM No comments: 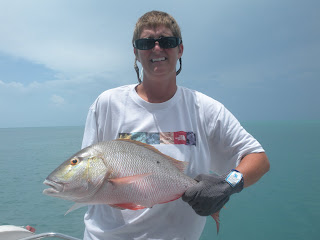 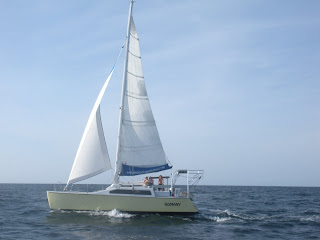 Our crossing from the Bahamas to Florida would be a three day event. First, we departed Green Turtle and sailed to Allan's Pensacola (23 miles).

On day two we sailed another 32 miles to reach Great Sale Cay. This then positioned us for the third and biggest day - 117 miles back to Fort Pierce, Florida.

All along the Bahama banks we continued to fish. I lost track of how many barracuda we caught and tossed back - at least 10. The fishing was looking like lots of work and no yield until both lines started humming and Dave and I struggled to bring in two fish that were - most definitely - not barracuda. Unfortunately, one smart fellow would get away, but we managed to haul in his twin a real nice 24 inch mutton snapper. Dave and I have been really pleased with the fish we've been able to catch while in the Bahamas, but let me tell you this mutton snapper is the BEST!!!! Despite its 24 inch length, it yields almost as much as a 42 inch mahi and it tastes - oh my!! You can definitely bet we will be fine tuning the tackle box to catch more mutton snapper next year!

Oh yes, but the main event wasn't the fish, it was the last 117 mile leg into Florida. Chris, on Romany, and Dave could not have planned it any better. We crossed the last 50 mile stretch of the banks by nightfall and entered Atlantic waters. The weather was great, the timing excellent as we crossed the stream and found ourselves at the Fort Pierce entrance at sunrise.

What an incredible journey it has been. Can you believe that we traveled over 1100 miles in our 12 weeks in the Bahamas. Hard to imagine there is that much territory to cover and even harder to imagine that there is plenty we haven't yet seen. Well there is always next year.

But wait, don't think it is over just yet, because there is lots of mileage left to cover. Our final destination is the Chesapeake.

The Admiral
Posted by Captain Dave and Admiral Joanne at 5:27 AM No comments: 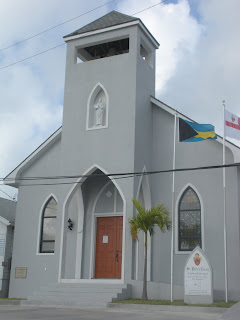 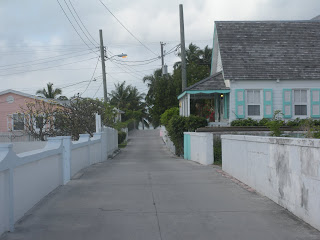 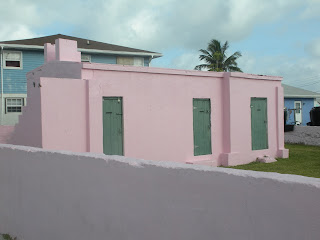 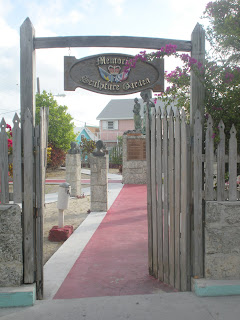 At Green Turtle Cay we celebrated Easter and attended services at their beautiful new church St. Peters (Photo 1). Afterwards, we joined friends on Romany and Iolar for lunch at Pineapples Grill.

It would be our last opportunity to visit with Walt and Lynn on Iolar as we would be heading north with Romany and postioning ourselves for the big crossing back into Florida. It is amazing how quickly the time has gone. We've been in the Bahamas for 12 weeks, but it certainly seems much less than that.

But before we go, we must take a walking tour of Green Turtle. We did this on Easter Monday - a Bahamian holiday - so town was quiet. Despite the quiet, the Sculture Garden was open and we were able to view the bronze sculptures of some of the most prominent citizens of the Bahamas (Photo 4). We also passed the old jail. Certainly not a place I'd want to spend time in during the hot Bahamian summer (Photo 3). 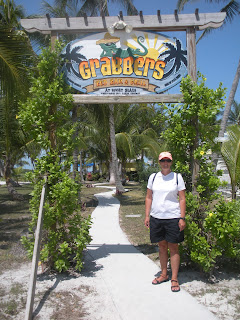 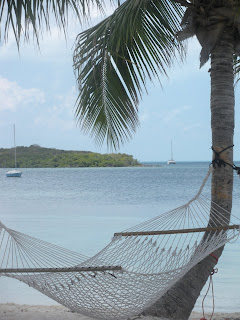 From Marsh Harbor it was off to Guana Cay. Such a taxing day having to travel 5 miles to the next big stop. That is one of the amazing differences between the Abacos and the other island chains in the Bahamas. The Abacos are much more compact with lots of interesting things to do in a small area. Whereas the other Bahamain island chains are more widespread.

Nonetheless, lunch at Guana met with tough choices. Do we lunch at the well known oceanside beach bar Nippers or the popular beachside bar Grabbers. Hmmmmm. Tough choices, but we eventually chose Grabbers as it offered a bit more shade and views of Tropical Breeze in a distance.

Lunch was great and the day was still young so the Captain and I decided to navigate the Whale passage and head up to Green Turtle for the evening.

The Admiral
Posted by Captain Dave and Admiral Joanne at 4:50 AM No comments: