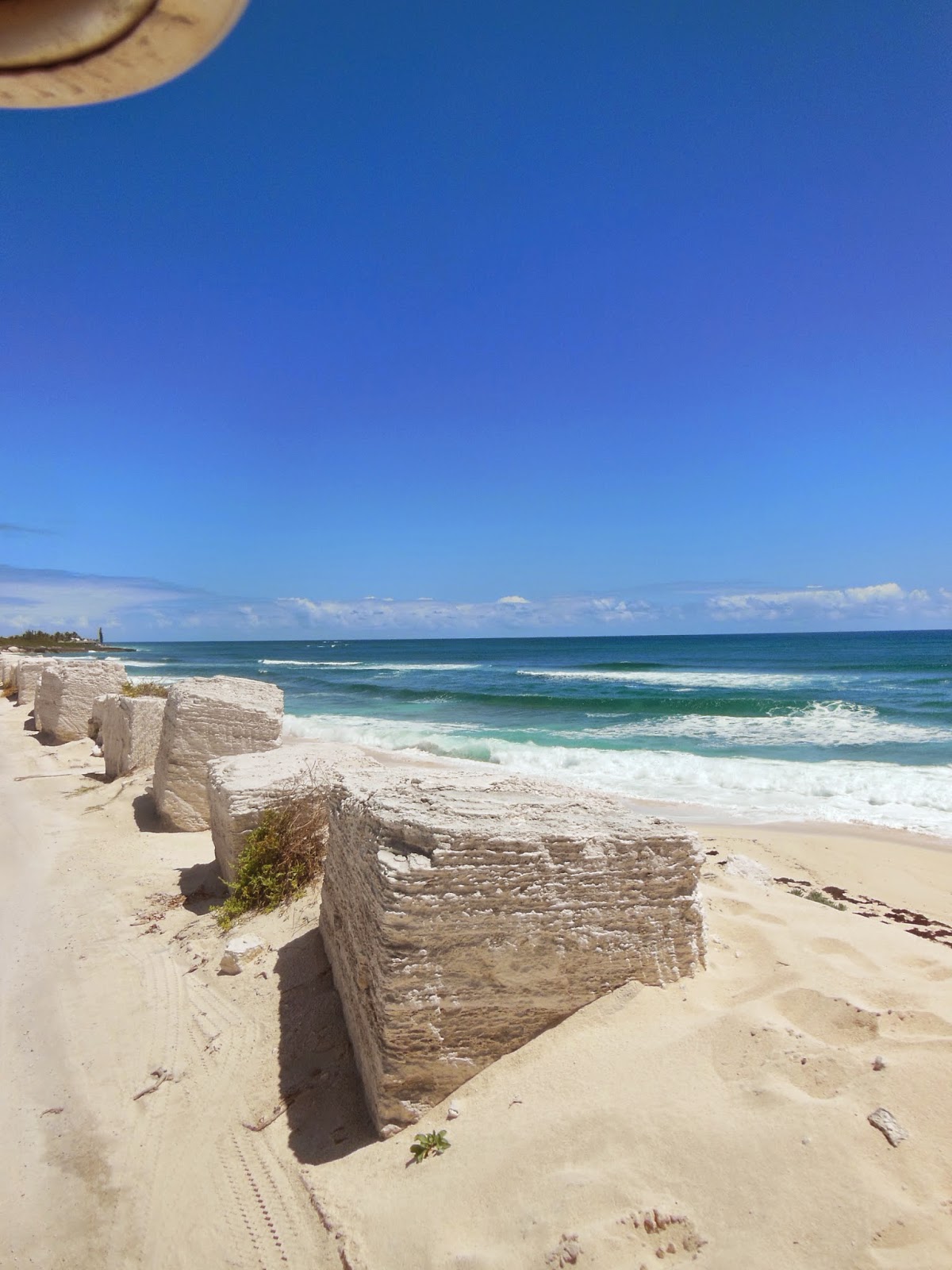 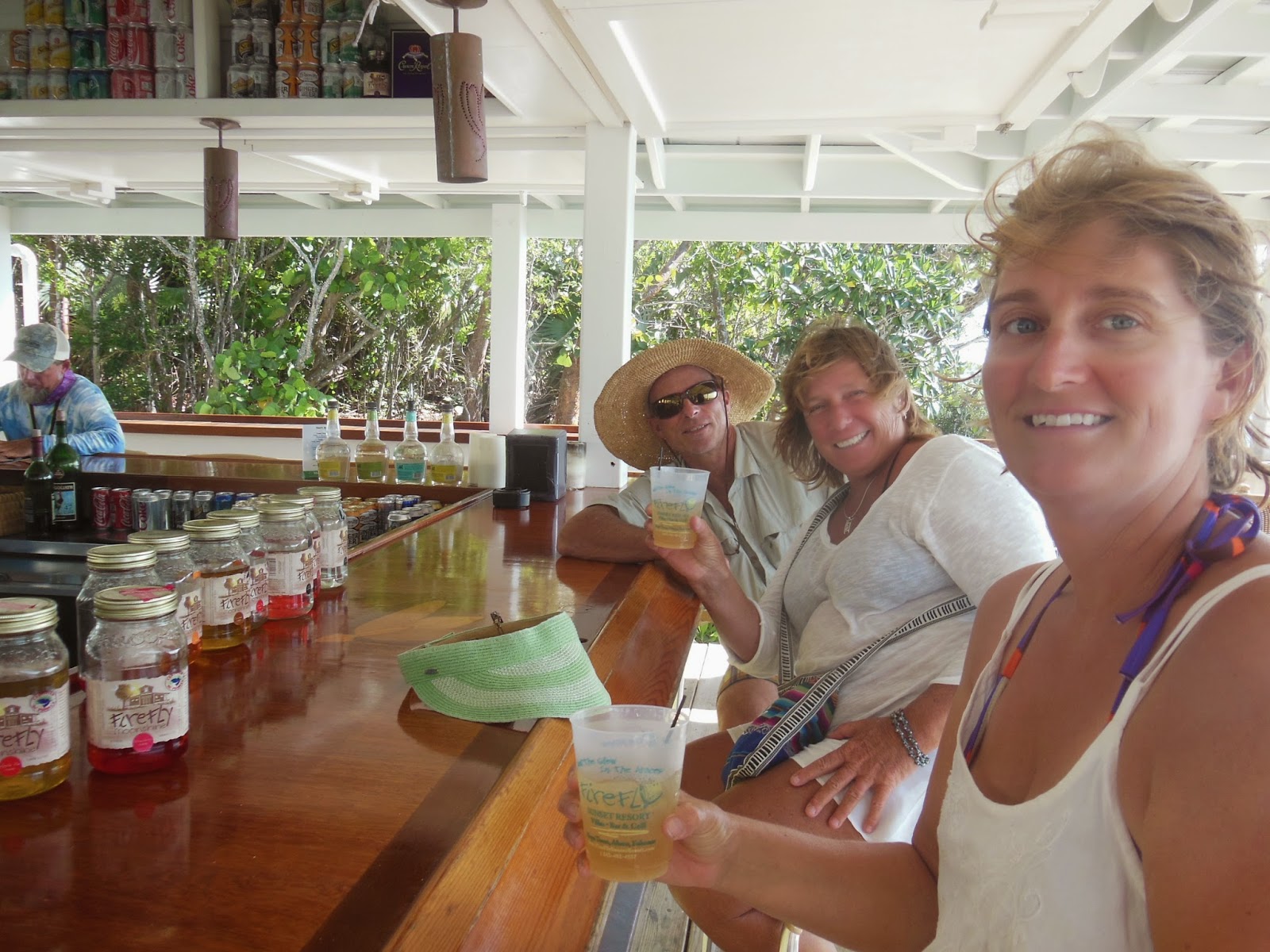 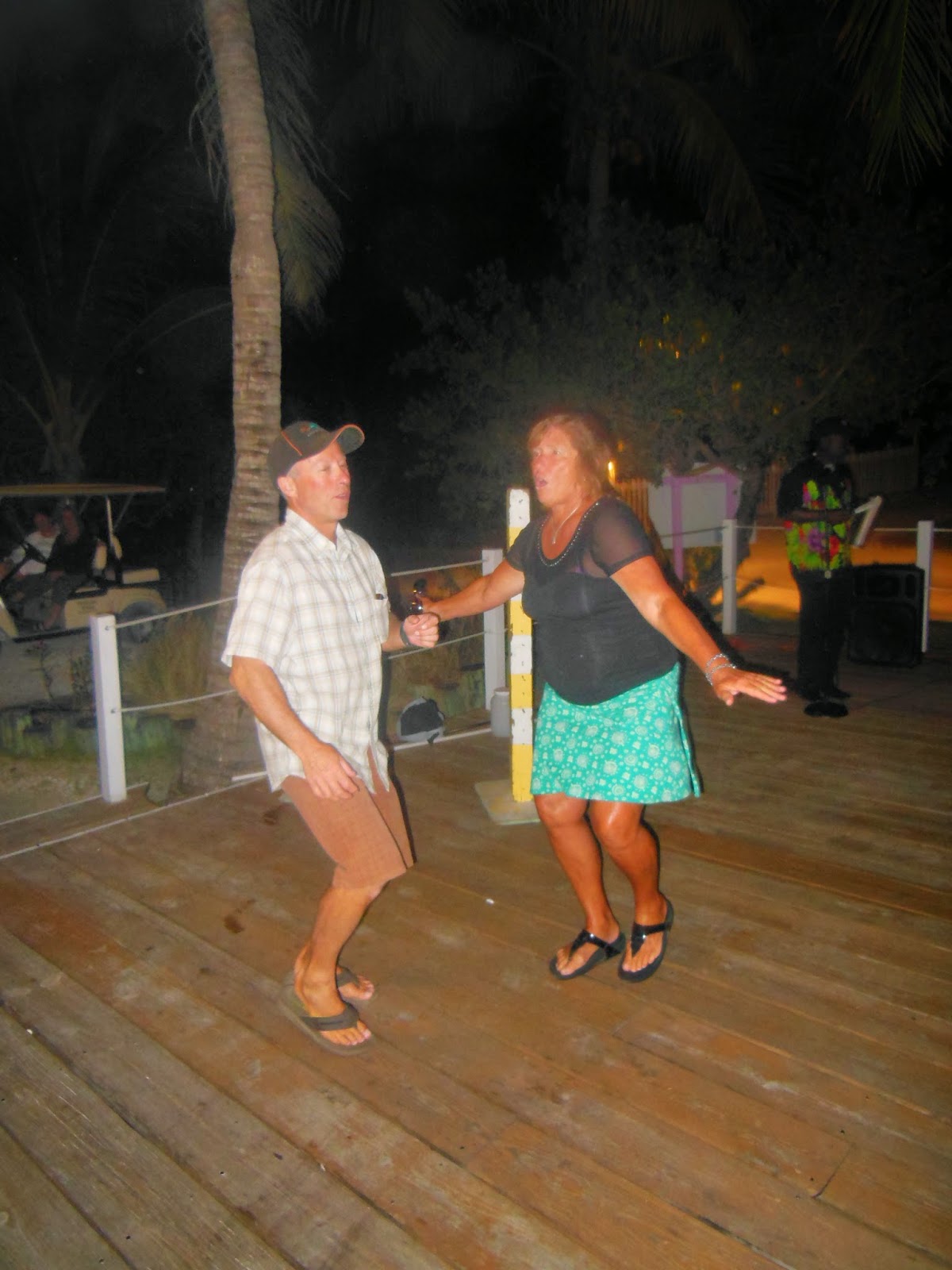 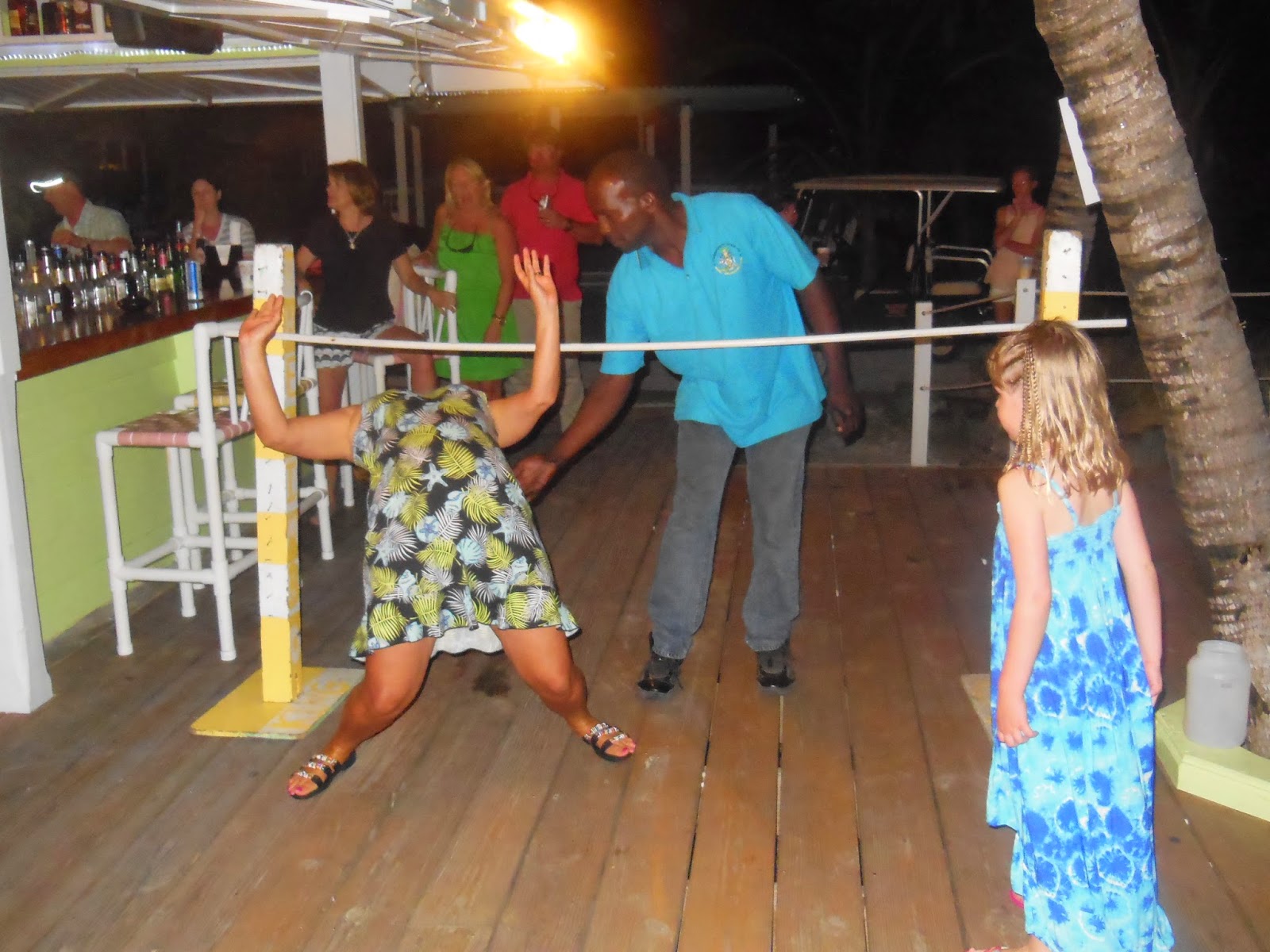 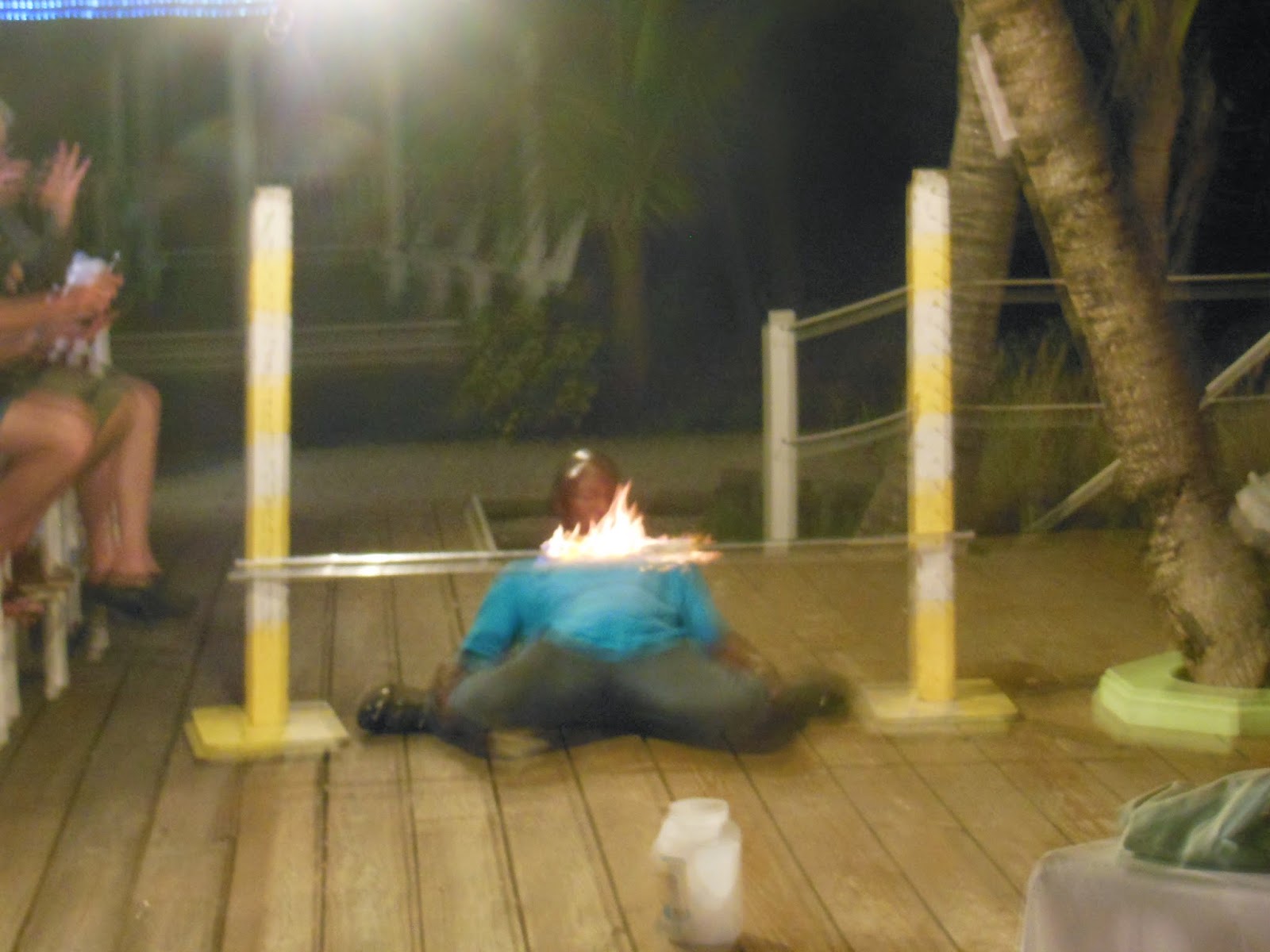 In Hopetown we rented a golf cart with friends Art and Brenda on Zippity Doo Dah.  We enjoyed the beach, explaored the island and enjoyed a great BBQ buffet and entertainment at Seaspray.
Yes that is me doing the limbo in photo 4.  Photo 5 features the 'Limboman' going low and under fire.﻿

The Admiral
Posted by Captain Dave and Admiral Joanne at 12:14 PM 1 comment: 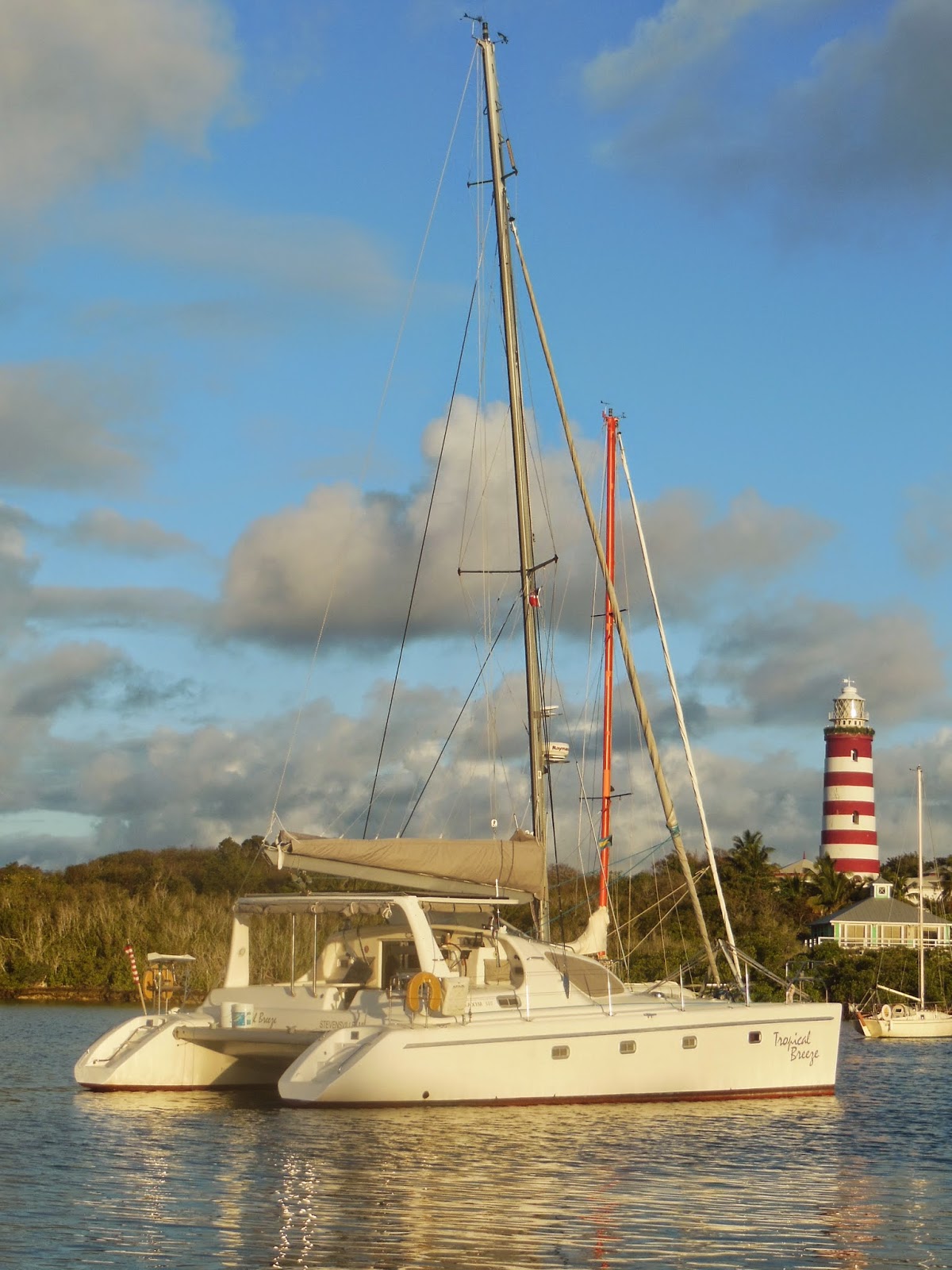 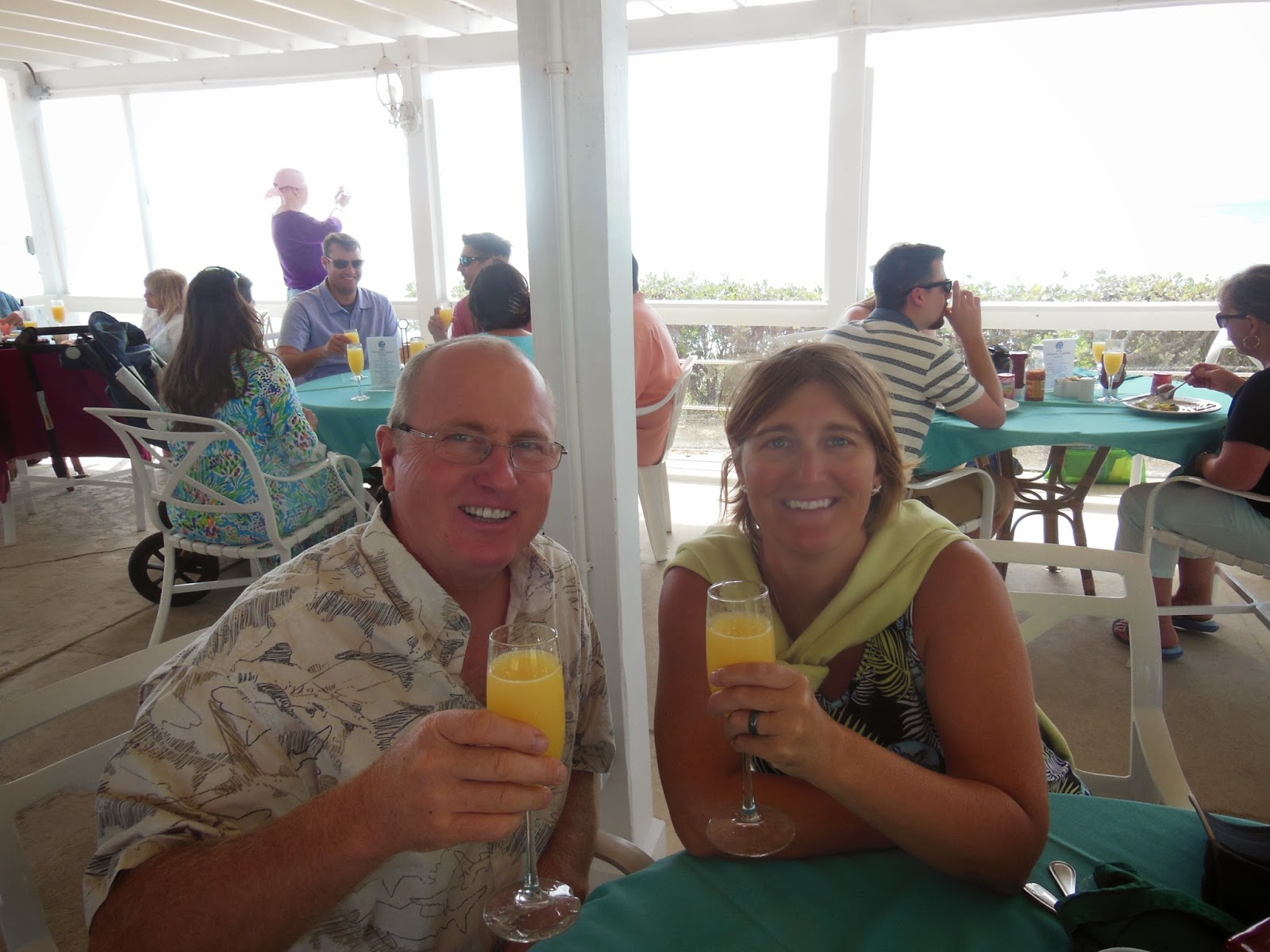 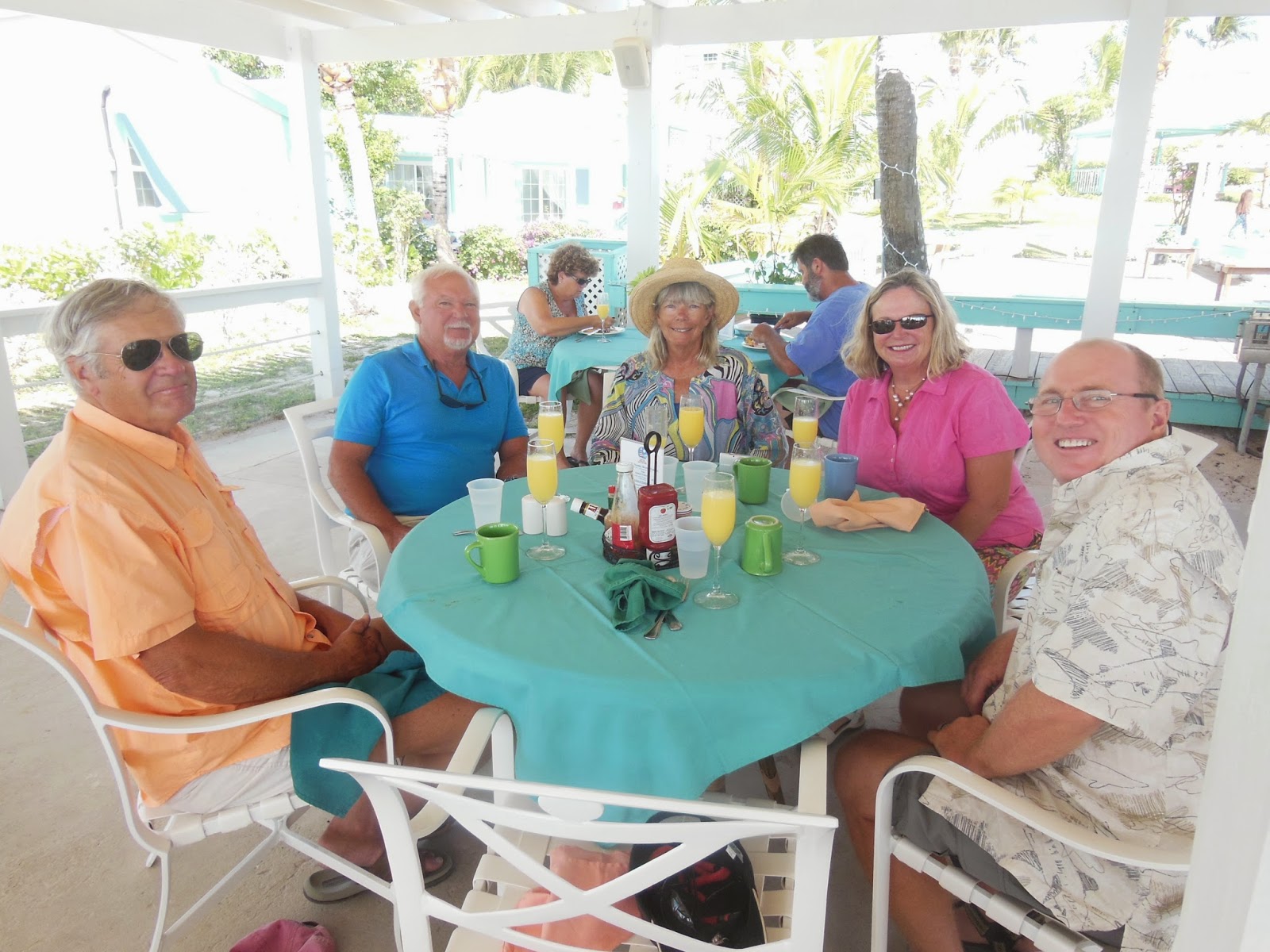 We celebrated Easter with friends in Hopetown.
The Admiral﻿
Posted by Captain Dave and Admiral Joanne at 4:42 PM No comments: 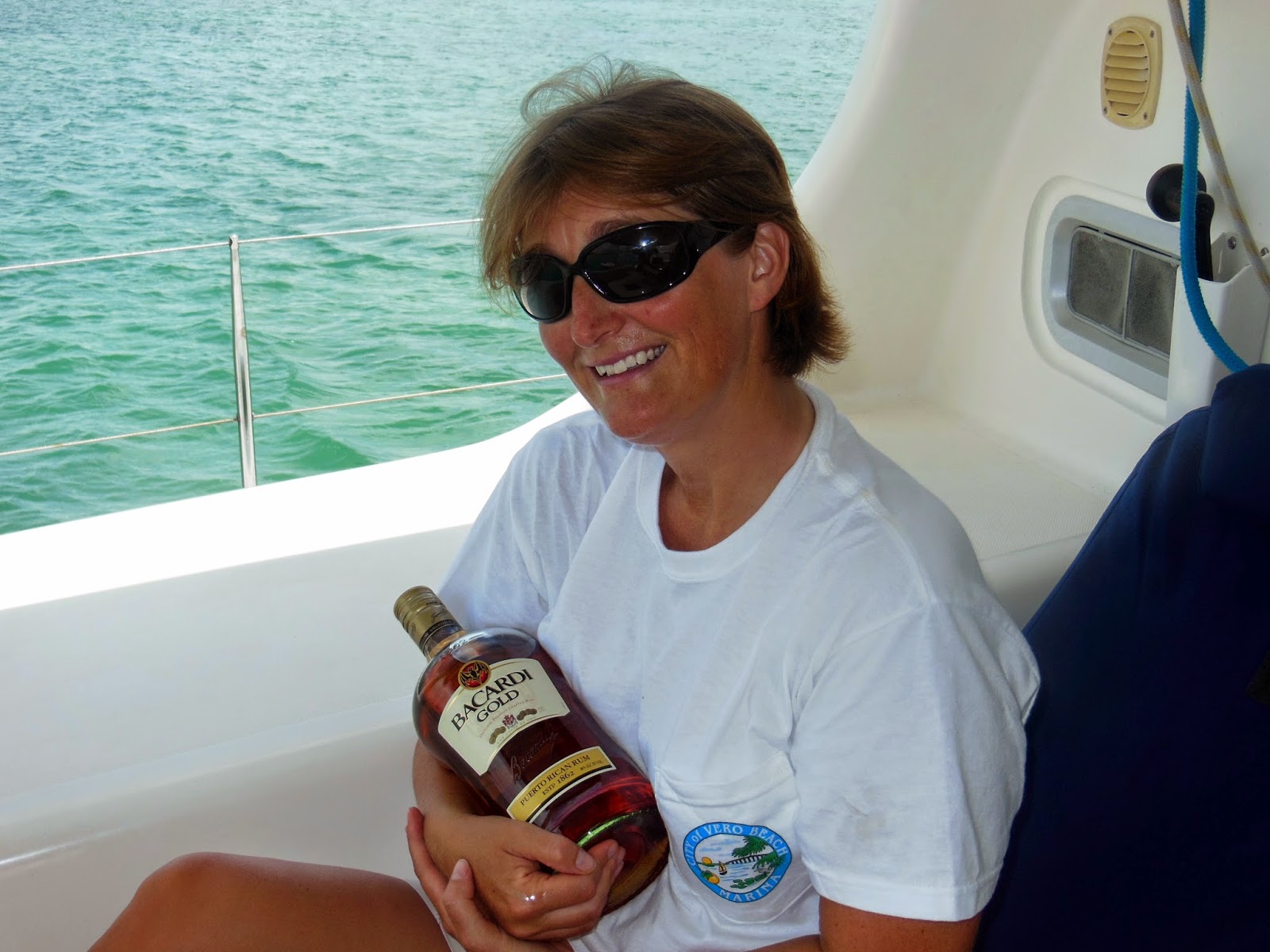 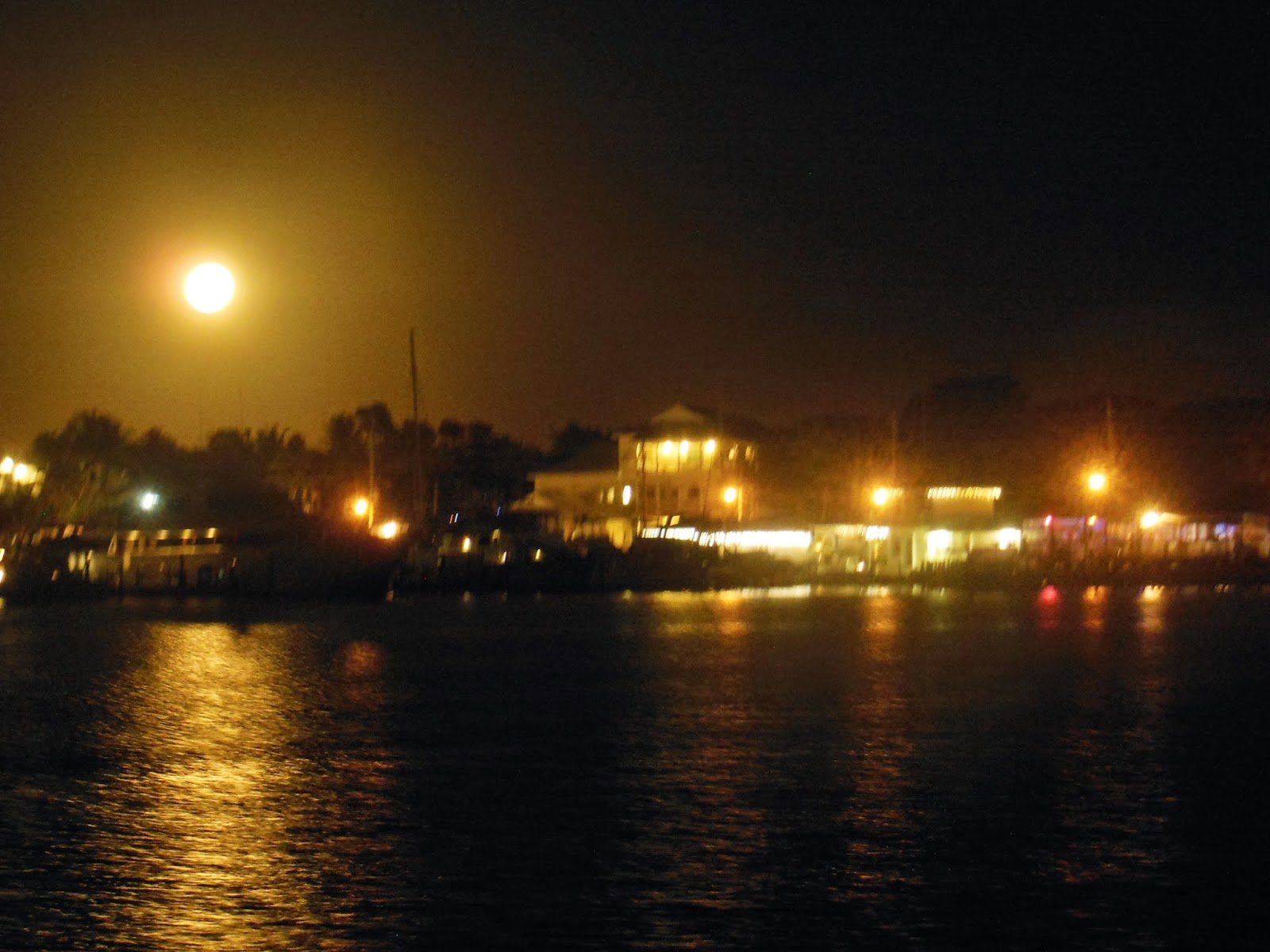 There is one thing that should never happen on a boat and that is a sailor should never run out of rum.  Well, aboard the 'Breezer' we had our first ever rum shortage.  Not only did we run out of dark rum, but we were within 4 fingers of running out of mango rum as well.  As you can imagine we were pretty happy to pull into Marsh Harbor to remedy the situation.
The Admiral﻿

Posted by Captain Dave and Admiral Joanne at 4:21 AM No comments: 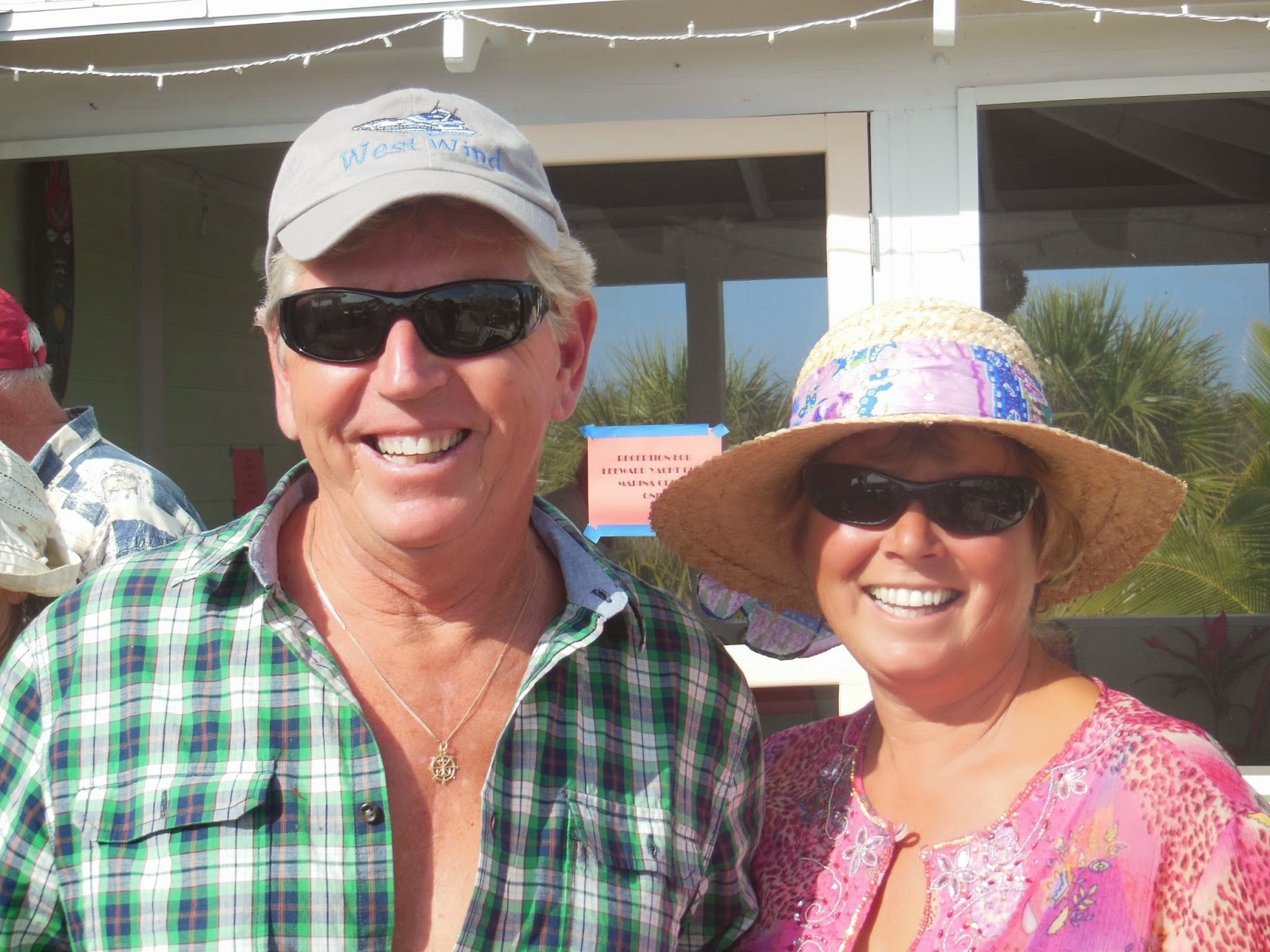 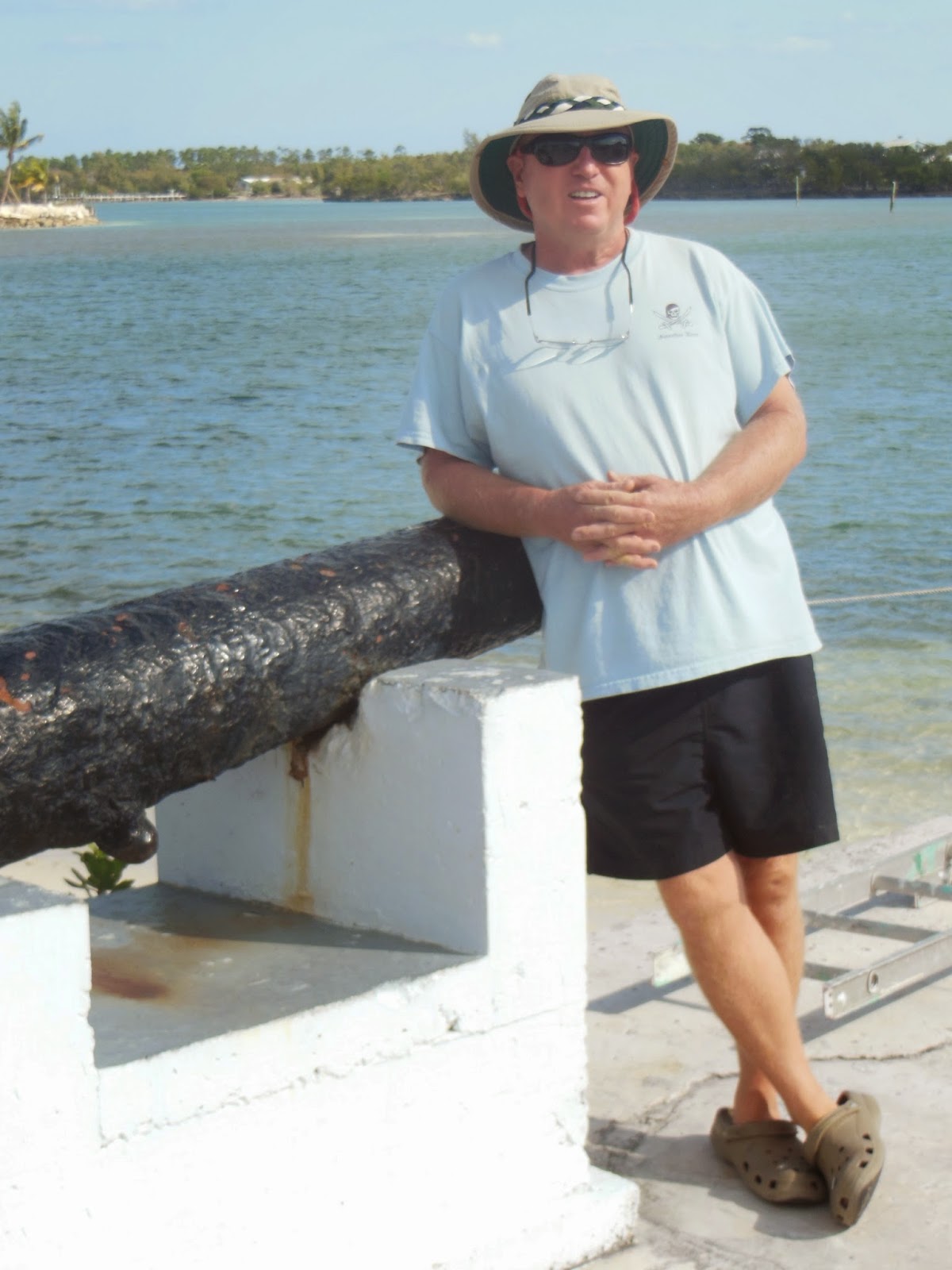 Once we arrived in the Abacos we made a beeline for Green Turtle Cay where we were able to catch up with friends Eric and Ellen on Westwind before they returned home.
﻿
The Admiral
Posted by Captain Dave and Admiral Joanne at 2:29 PM No comments: 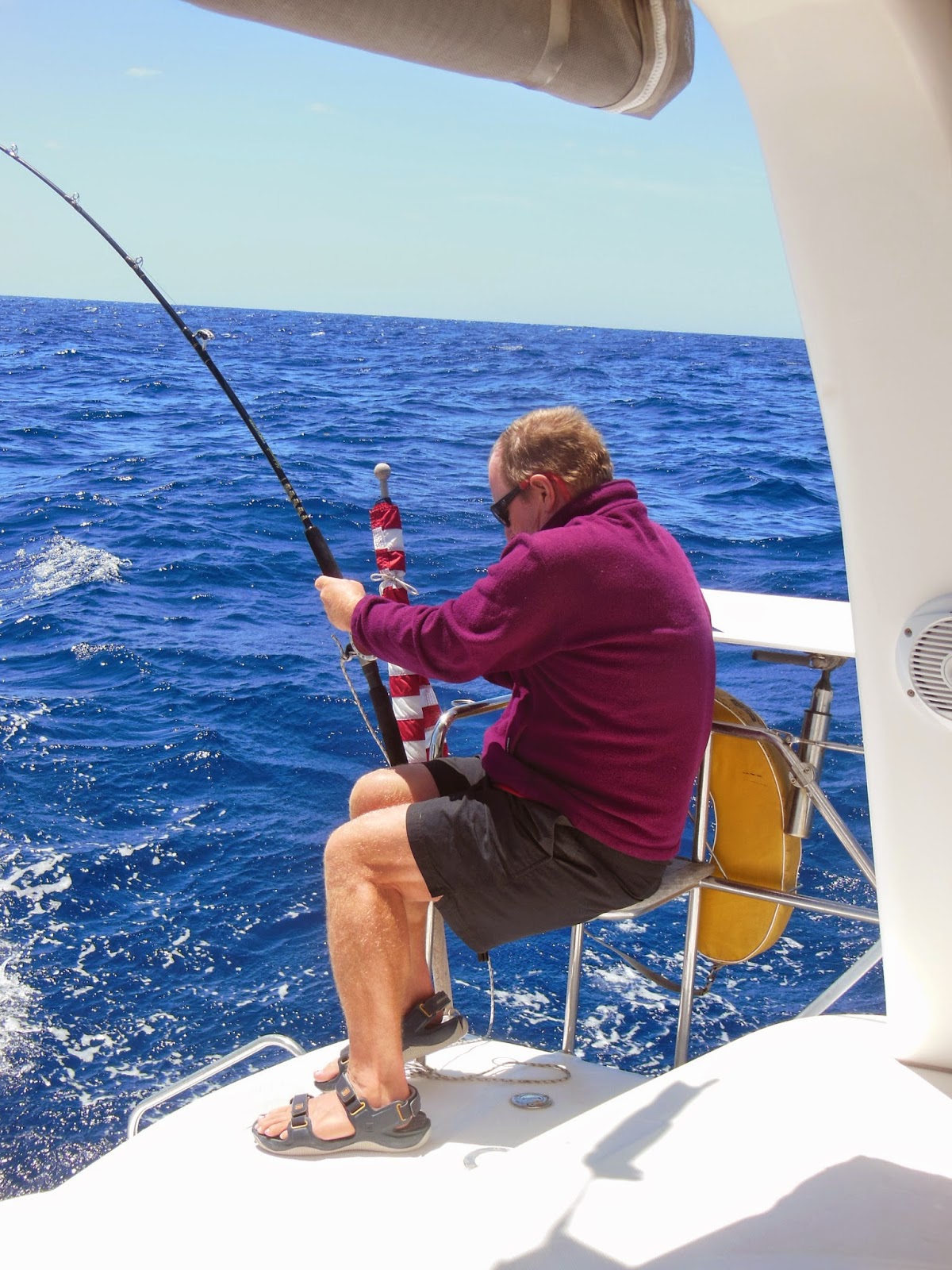 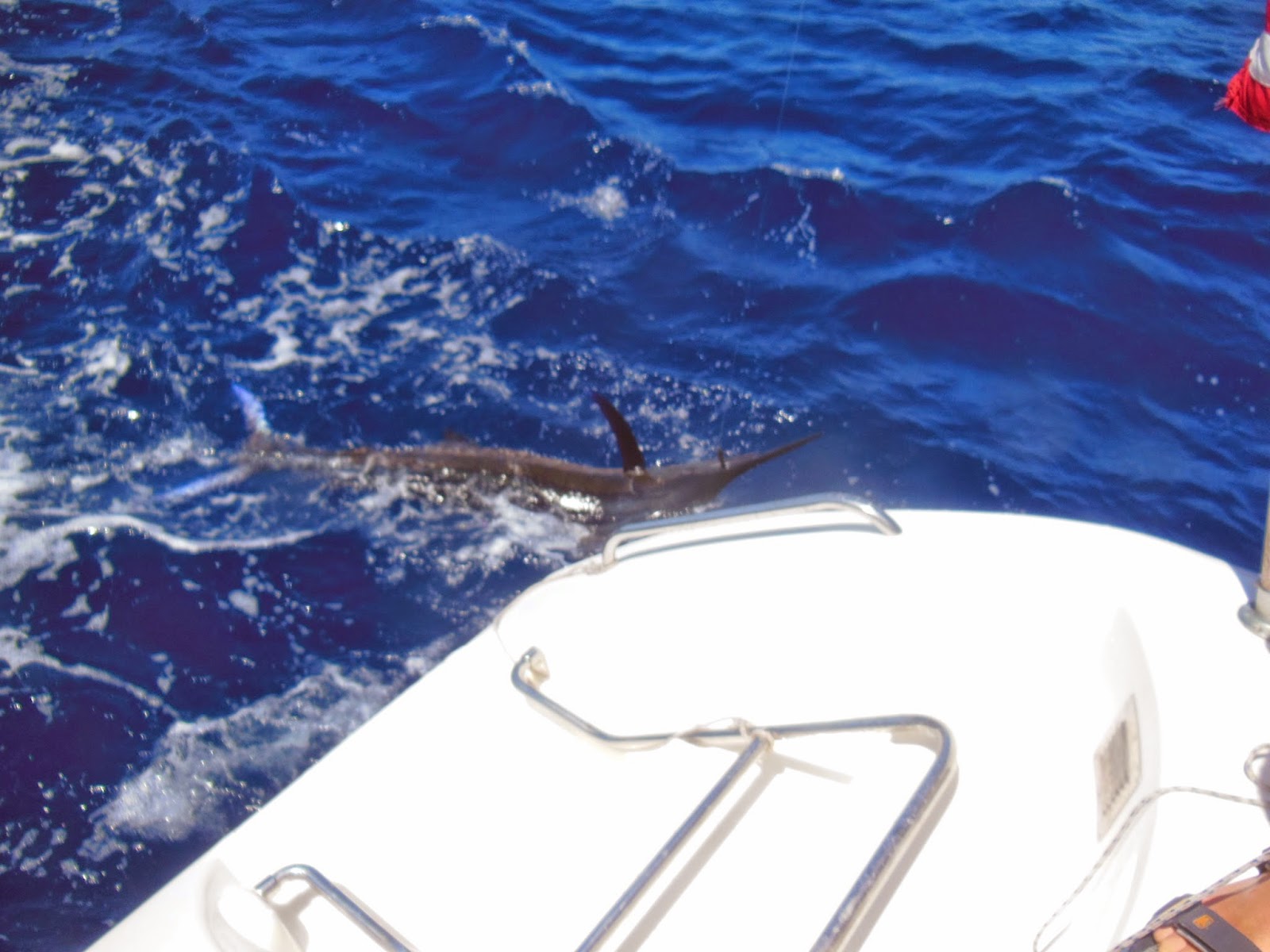 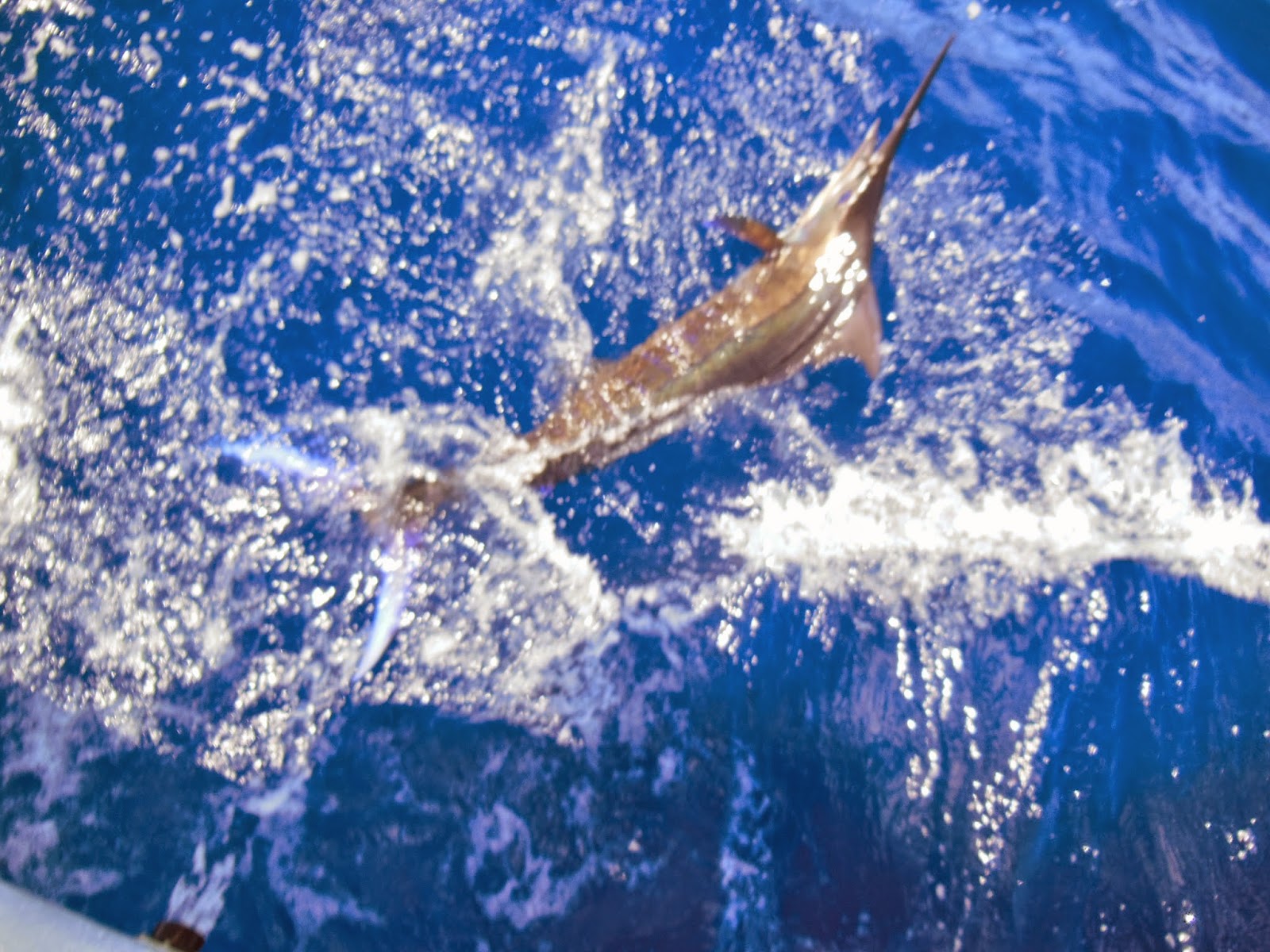 Okay.  We were ready.  Each time we've crossed to the Abacos the fish have not been very nice to us.  We've lost lures.  We've broken line.  And, only once have we caught a fish.  But this time we were ready.  I had my brand new - still a virgin - fishing rod and we both had our reels restrung with 100+ lb braided line.  If we broke a line this year, we probably really weren't able to handle what was on the other end anyway.

So off we went, leaving Royal Island just after 6 am and out into open waters.  The wind filled in nicely and we were clipping along at 7.5+ knots.  A bit too fast for trolling, but hey, you can't catch anything if you don't try.

As time passed, we found ourselves constantly reeling in the lines to remove the seaweed that was picked up by the lures.  By afternoon we were getting pretty weary of this task and were just about to call it quits when things changed.  Dave's fishing reel (why wasn't it mine?! =( ) suddenly made a short whir.  It was brief and we thought we'd picked up more seaweed.  As the Captain reeled in his line we couldn't help but notice a dark dorsal fin and a sizable wake following the lure.  About 10 foot off the stern Dave paused his reeling and the fish took hold of the lure and started hightailing it in the other direction.   So to recap, we are headed 7.5+ knots in a northerly direction and the fish starts running full speed in a southerly direction.  And let me tell you, there was no stopping this fish he just kept going and Dave kept tightening up the drag and the fish still powered thru and took more line out.  We reached a point where the reel was getting warm from the tension on the drag.  Holy cow!

So with Dave in full fishing mode, I let out the jib and pointed the Breezer into irons trying to stall us.  Meanwhile Dave fought the fish.  We have no idea how much time passed.  The fish would pause and Dave would take the opportunity to reel in line.  Then the fish would fight and Dave would lose some ground.  On and on it went.  Boats that had fallen far behind us and out of sight of the horizon began to reappear and still Dave fought the fish.

Finally we got it close enough to the boat and could identify it as a marlin.  Holy crap a marlin!!  About 5-6 foot long, a big beautiful blue tail.  It reenergized us for the continued fight.  As  Dave brought the fish to the stern I grabbed the camera and began snapping pictures.  He managed to grab onto the marlin's bill and release the line and lure but before I could get into position for a picture with Dave holding onto the marlin's bill the fish slipped out of Dave's hands and back to the sea.

Man what an afternoon!

The Admiral
Posted by Captain Dave and Admiral Joanne at 9:26 AM 1 comment: 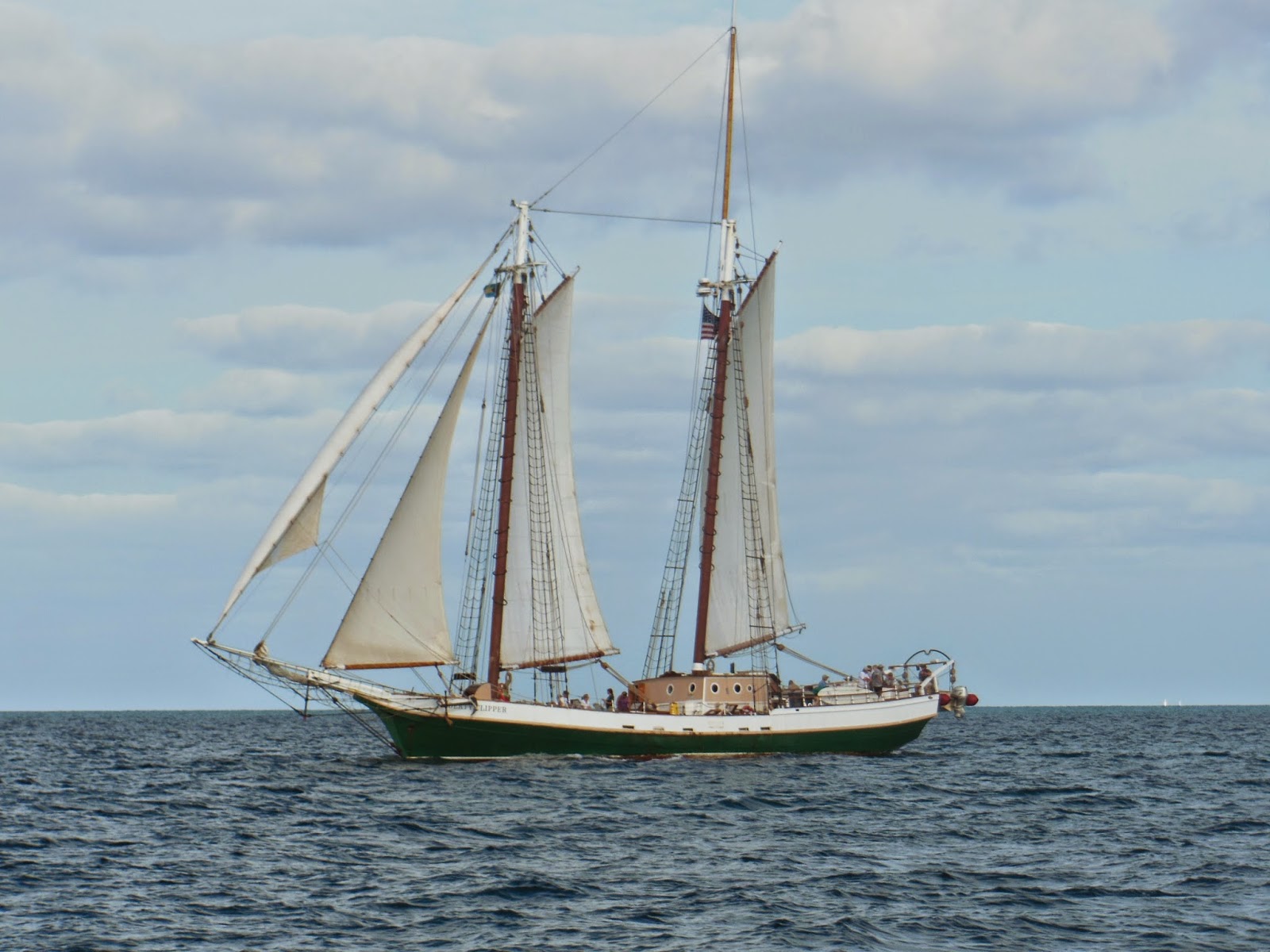 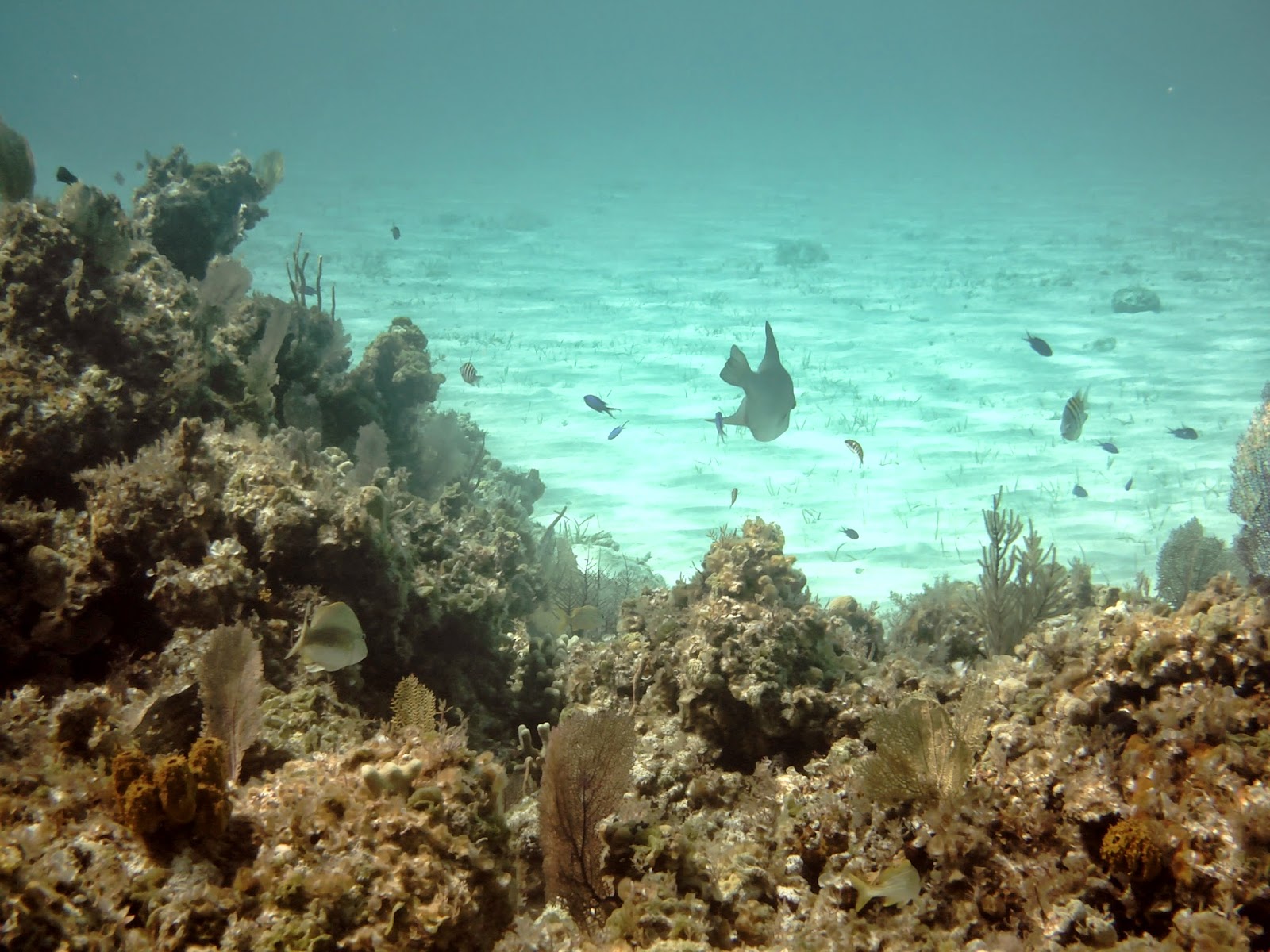 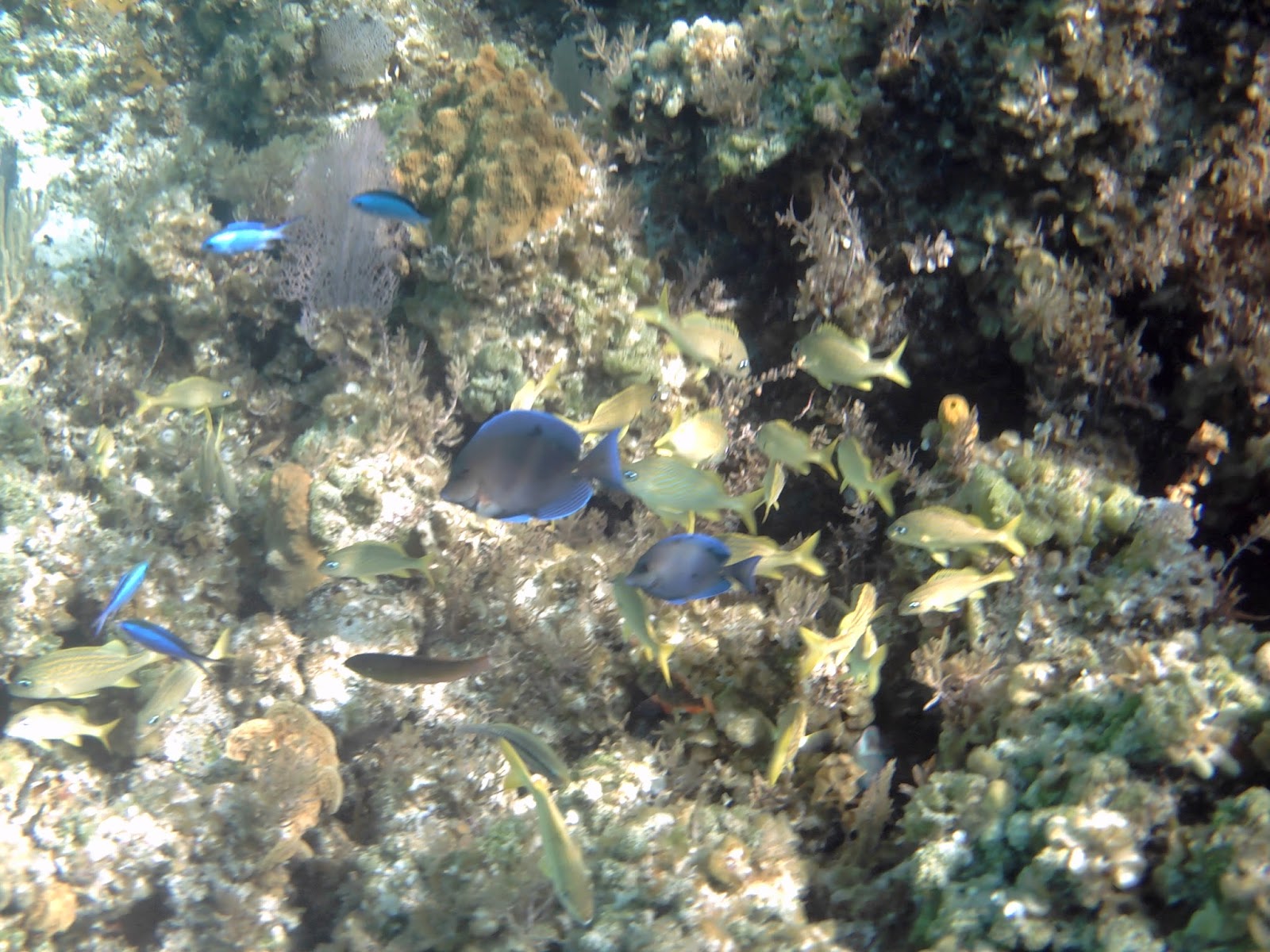 A new stop for us was Ship Channel Cay where we passed a schooner firing its cannon as we sailed along.  Once the anchor was down we enjoyed snorkeling the coral heads.
The Admiral

Posted by Captain Dave and Admiral Joanne at 12:15 PM No comments: 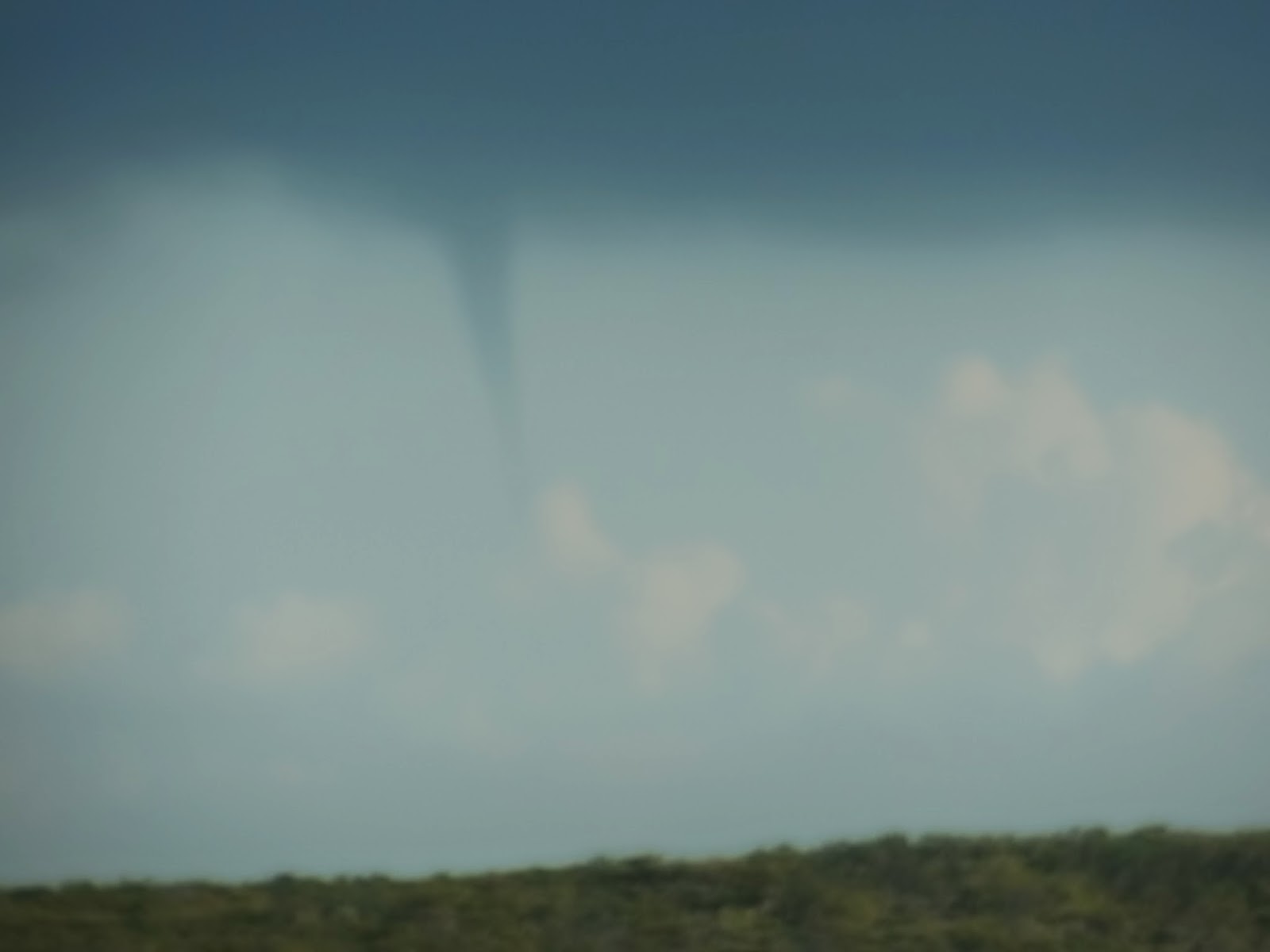 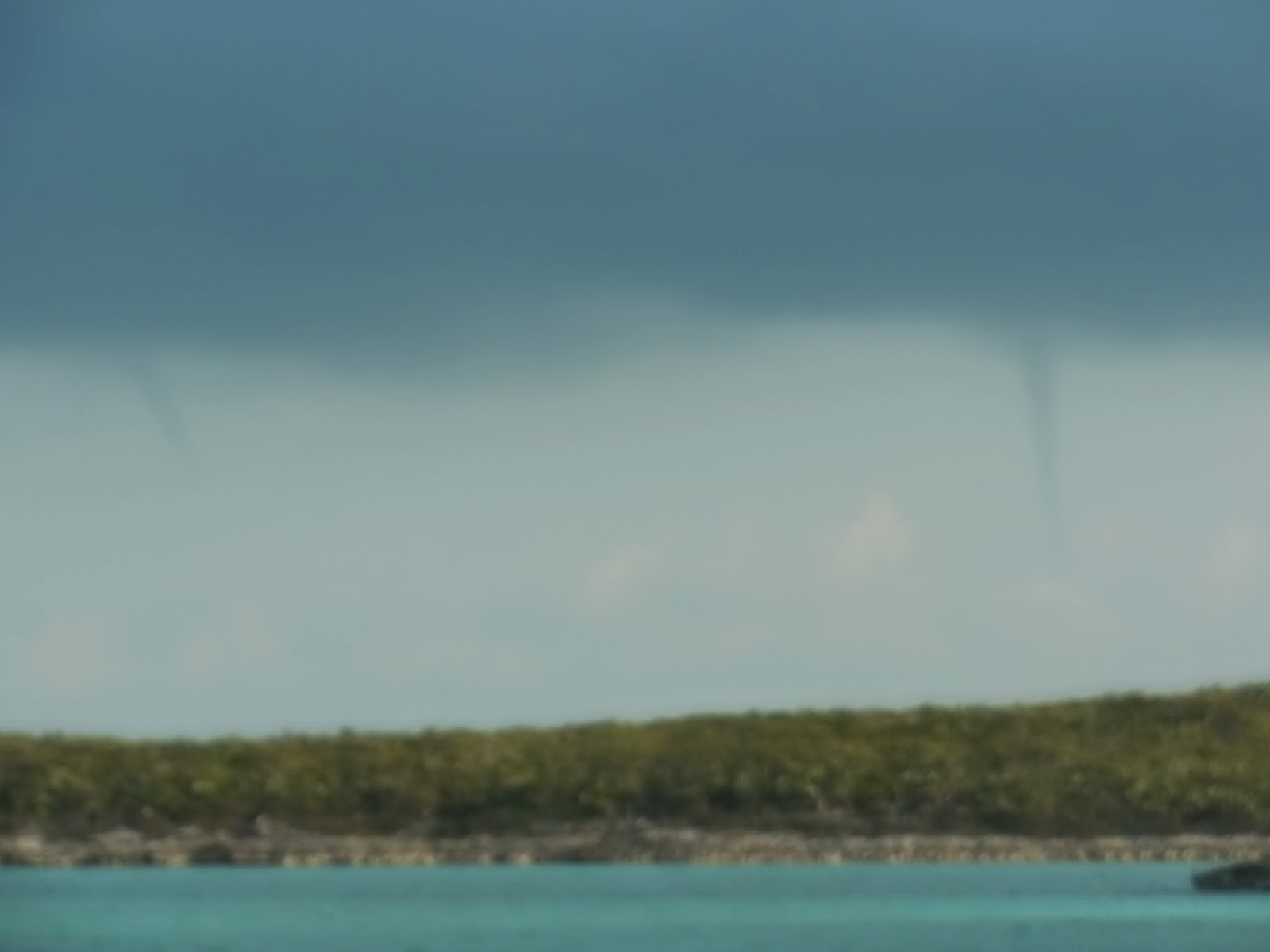 Belle Island became a go to stop when we needed to wait out a passing front.  On one such occasion we actually spotted waterspouts forming in the clouds.  Pretty cool.
The Admiral

Posted by Captain Dave and Admiral Joanne at 12:01 PM No comments: