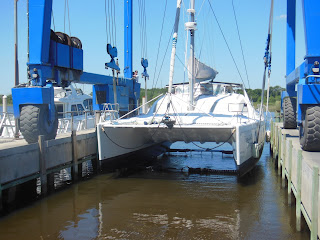 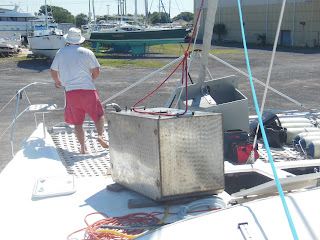 Projects.  Projects.  And more projects.  That would be the theme for haul out this year.  The list was huge.  In addition to the general maintenance and storage we needed to haul out one of our fuel tanks so that we could ship it off to a welder for repair.  The tank was not leaking but the baffles within the tank had come loose and were moving around in the fuel tank.  This was a particular pain since that fuel tank is just behind the wall at the head of our bed allowing us to hear the periodic sloshing back and forth.
But of course, you can't just hoist out the tank.  First the windlass had to be dismantled and removed.  Then the anchor box had to be unbolted and removed.  This of course, was too big to fit through the hatch so the Captain had to sand down one of the walls of the box so it would fit.  Only then could we pull the fuel tank from its resting place.  While the Captain maneuvered the heavy loads, I manned the winch and using the halyard hoisted the windlass, anchor box and eventually the fuel tank from their hole.  Once everything was on deck it was quite the site.  Stuff was just everywhere.
With the fuel tank repair complete we decided to pump the fuel from the starboard tank to the port tank and filter it.  While doing this we discovered the starboard tank also had a baffle broken so once we had the port tank back in and loaded with fuel we hauled out the starboard fuel tank and took that over to the welder.
Ah and this was just one project.  In addition, we took the anchors and chain over to a galvanizer to be galvanized - they are absolutely beautiful now.  We varnished the wood entry step and kitchen floor - also now stunning.  Sanded and painted a rusty spot on the oven door.  Cleaned all the stainless.  Took down the main sail - a first for us - so we could have a new sail cover made.  Removed the solar panels from the bimini, removed the bimini and will take down the bimini frame so that a hardtop can be constructed.  This also included the need to make 4 small holes in the ceiling of the kitchen and salon.  And while I am not happy about having holes in the ceiling of the deck house, I am rather amazed at the beefy construction Dave found while making the holes.  Quite amazing!
The Admiral
PS - For all the other Admiral's out there, you know I wouldn't allow holes in the deckhouse without getting something out of it.  I'm promised a complete interior paint job and new flooring to be installed this fall.  Yippee!!!
PPS - For all our followers, this will be my last post for the season.  Please return in the fall to check out how all our projects went and to join us for another season aboard the Breezer.
﻿

Posted by Captain Dave and Admiral Joanne at 4:07 AM 1 comment: 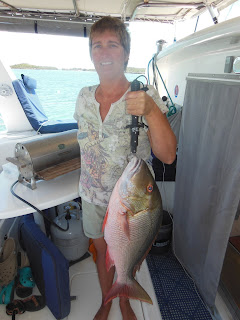 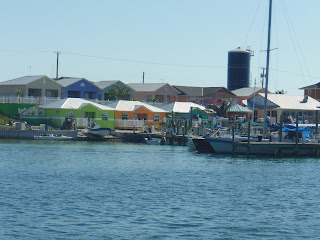 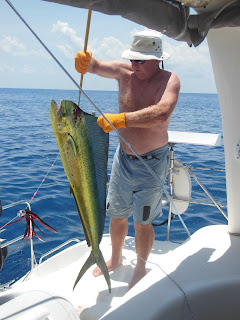 We left Treasure Cay early one morning, went through Don't Rock passage and then hoisted the sails for a tacking battle up the Sea of Abaco.  After a busy sailing day we found shelter from the winds at Allan's Pensacola.
The next day was another early start.  The northwest winds were still unabated and we made great time headed toward Grand Cay.  That is, until we made a final turn toward the north and west to get to Grand.  The slower speeds, however, enabled us to do some fishing and I was able to catch a big fat mutton snapper.  Though only 28" long, the fat guy would allow us to enjoy several great meals.
It was our first trip to Grand Cay - and it will not be the last.  The small community boasted many nice colorful homes all well maintained.  Walking along the single lane golf cart sized street through town everyone we passed - adults and children - said hello.
The marina bustled with tourist traffic.  As many power boaters appear to come over from central Florida for a day or two clear into the Bahamas and then fish before returning to the US.  We met one such group at Rosie's Restaurant  where we had dinner.  The group of 5 guys came over from the US., cleared in and spent the balance of the day fishing.  For the day they caught several mahi and a 110 lb tuna.  One of the mahi Rosie's kitchen had cooked up for dinner and they shared some of their catch with us.  I tell you there is nothing quite like fish dinner when the fish has been pulled from the ocean about 3 hours beforehand.  The group would spend the night in hotel rooms on Grand and then return to the US the next day.  They'd fish while in route.
Our plan was similar.  Only being in a sail boat our time at sea would be considerably longer.  Also, our destination would not be central Florida but one big hop to northern Florida.  We left Grand the following afternoon hoping for light winds.  They were light.  Very light.  Too light and we eventually forgot about the sails and motored our way back towards Florida.  The nice thing about no wind is that the ocean was still.  At one point it was so calm there were no ripples on the water at all.  The Captain took this opportunity for one last attempt at fishing and caught a really nice 46" mahi for his efforts.  Gotta love it!﻿

With the slow going we would be at sea 42 hours before our arrival back in Florida.  It was another great winter season, but the weather is warming and its time to head back to the midwest.

The Admiral
Posted by Captain Dave and Admiral Joanne at 3:40 AM No comments: 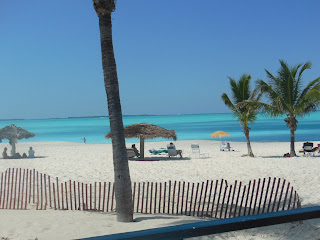 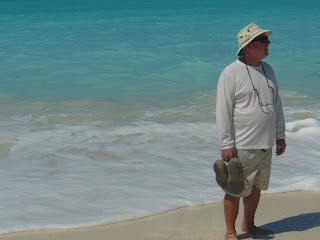 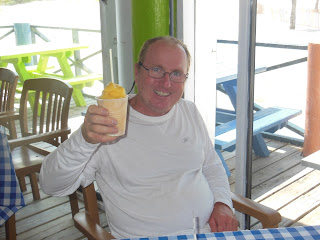 At Treasure Cay we walked the beautiful sand beach before stopping for frozen mango daiquiris.
The Admiral﻿
Posted by Captain Dave and Admiral Joanne at 3:52 AM No comments: 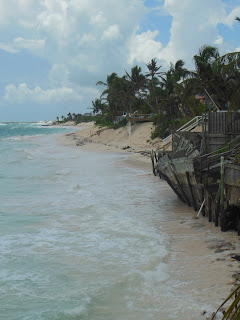 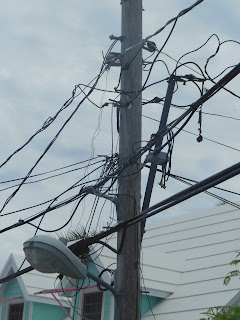 Back on shore we walked along the streets and beaches if Hope Town.  The houses are mostly quaint and brightly colored and while I probably should have taken photos of them, instead the Captain and I found the fence line along the Atlantic beach with all its ripples and rolls a bit more interesting.  The same held true for an electric pole at the southern end of town.  Can you imagine being the person to climb the pole and correct a problem - where would you begin.

Posted by Captain Dave and Admiral Joanne at 4:40 AM 5 comments: 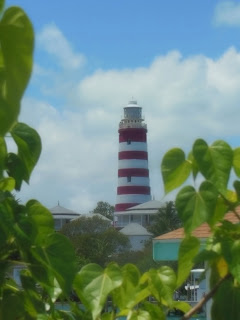 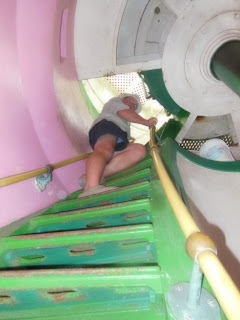 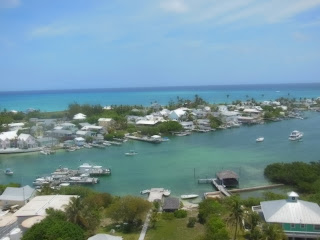 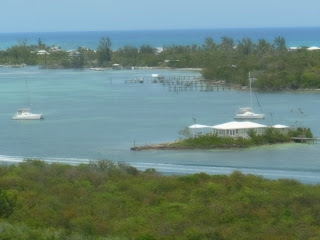 A trip to the Abacos would not be complete without a stop in Hope Town.  We enjoy it because it is so different from any other place in the Bahamas.  It has a large influx of tourism while maintaining a very village-like feel.  It is compact with golf cart sized streets and pedestrian alleyways allowing you to get around all the homes.  The basin is full of mooring balls and marinas and, because of Hope Town's popularity, usually full of boats as well.
We went into town with the plan of climbing the steps to the lighthouse one afternoon.  That trip would take us 6 hours.  Not because it took us that long to climb the 101 winding steps to the top but because once we were there we realized that the harbor below was full of friends that we had not seen in a while.  The first stop was David on Windchyme, followed by Dick and Ann on Nati, then Robin at On Assignment and finally Bob and Sharon on At Last.  What fun!
The Admiral﻿
Posted by Captain Dave and Admiral Joanne at 4:34 AM No comments:

Arrival in the Abacos 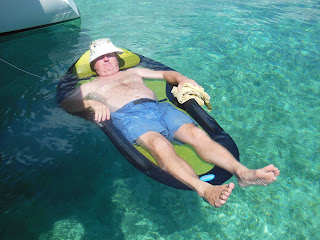 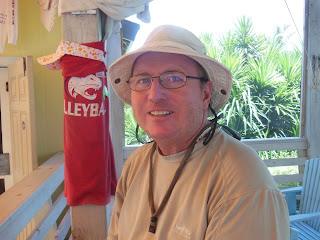 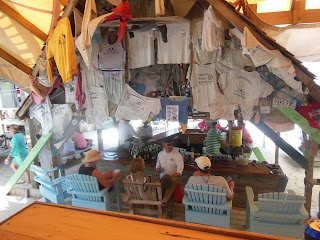 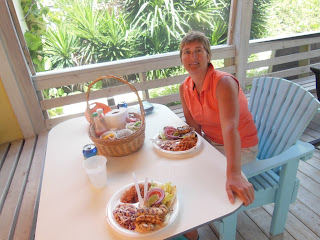 On arriving in the Abacos we opted to remain anchored near some of the southernmost less populated islands.  This rewarded us with peaceful beaches and beautiful water to laze about.

On one pleasant day we dinghied over to Little Harbor.  We enjoyed the bronze casting gallery and then took in lunch at Pete's Pub.

The Admiral
Posted by Captain Dave and Admiral Joanne at 3:12 AM No comments: