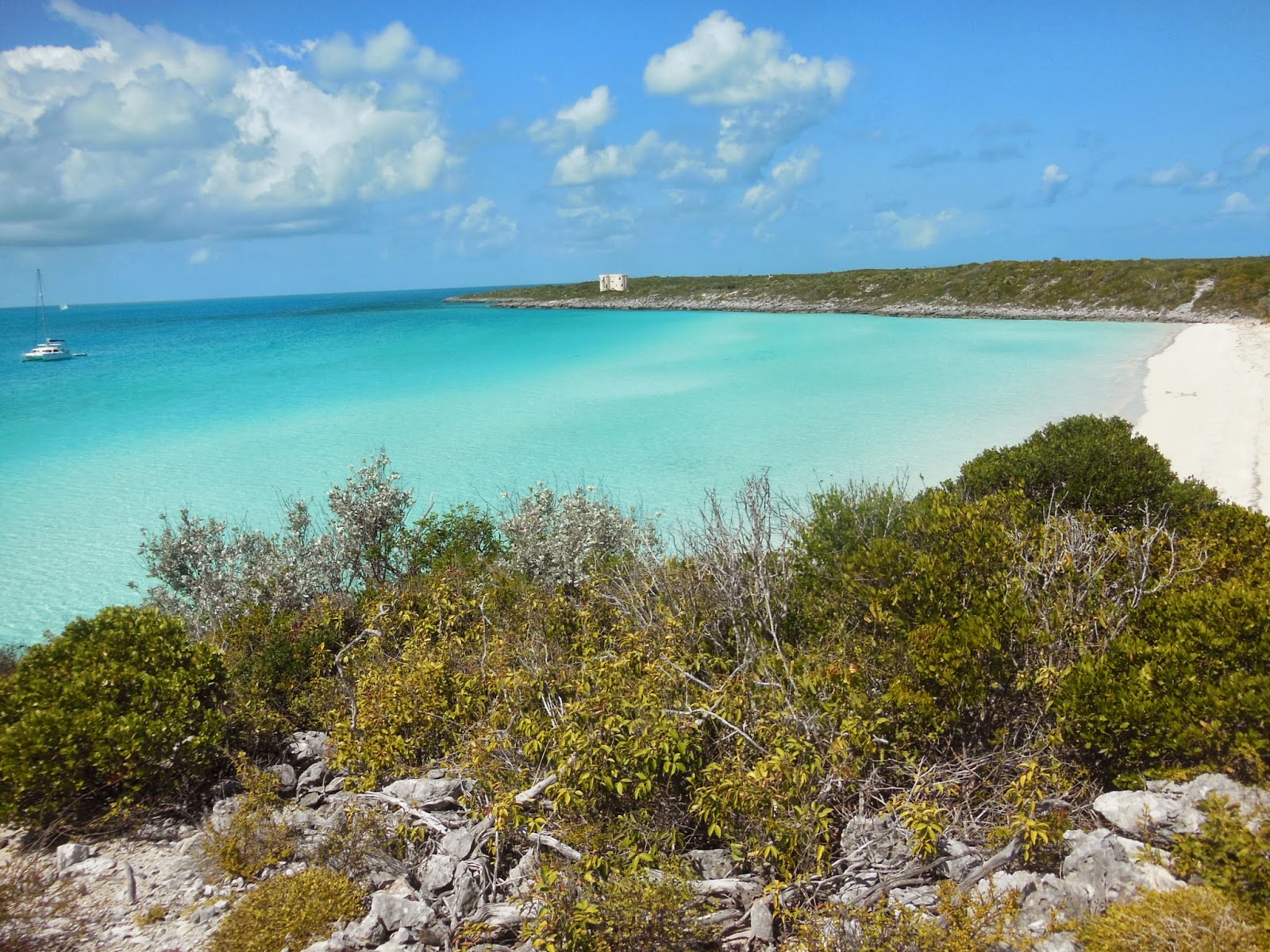 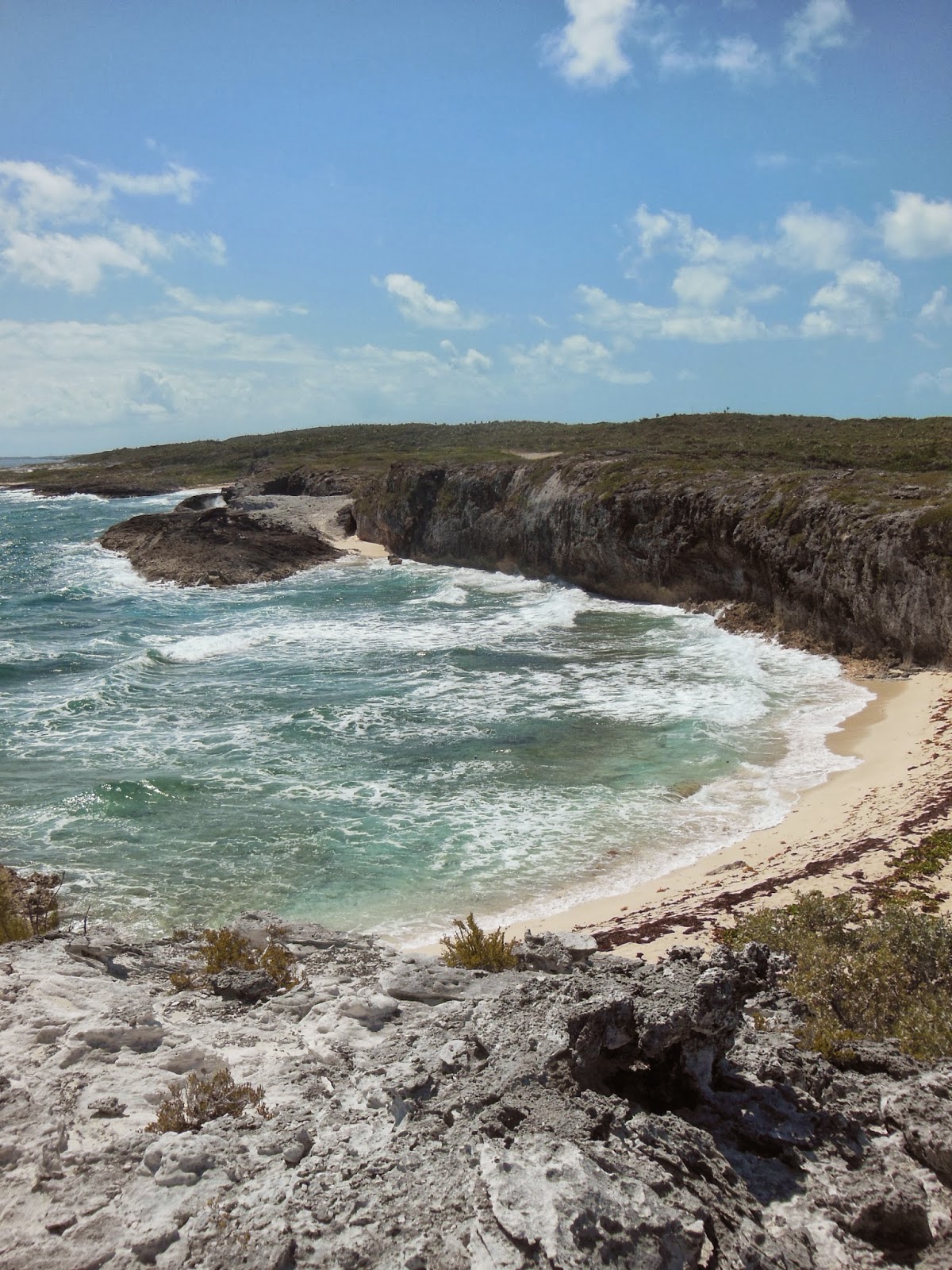 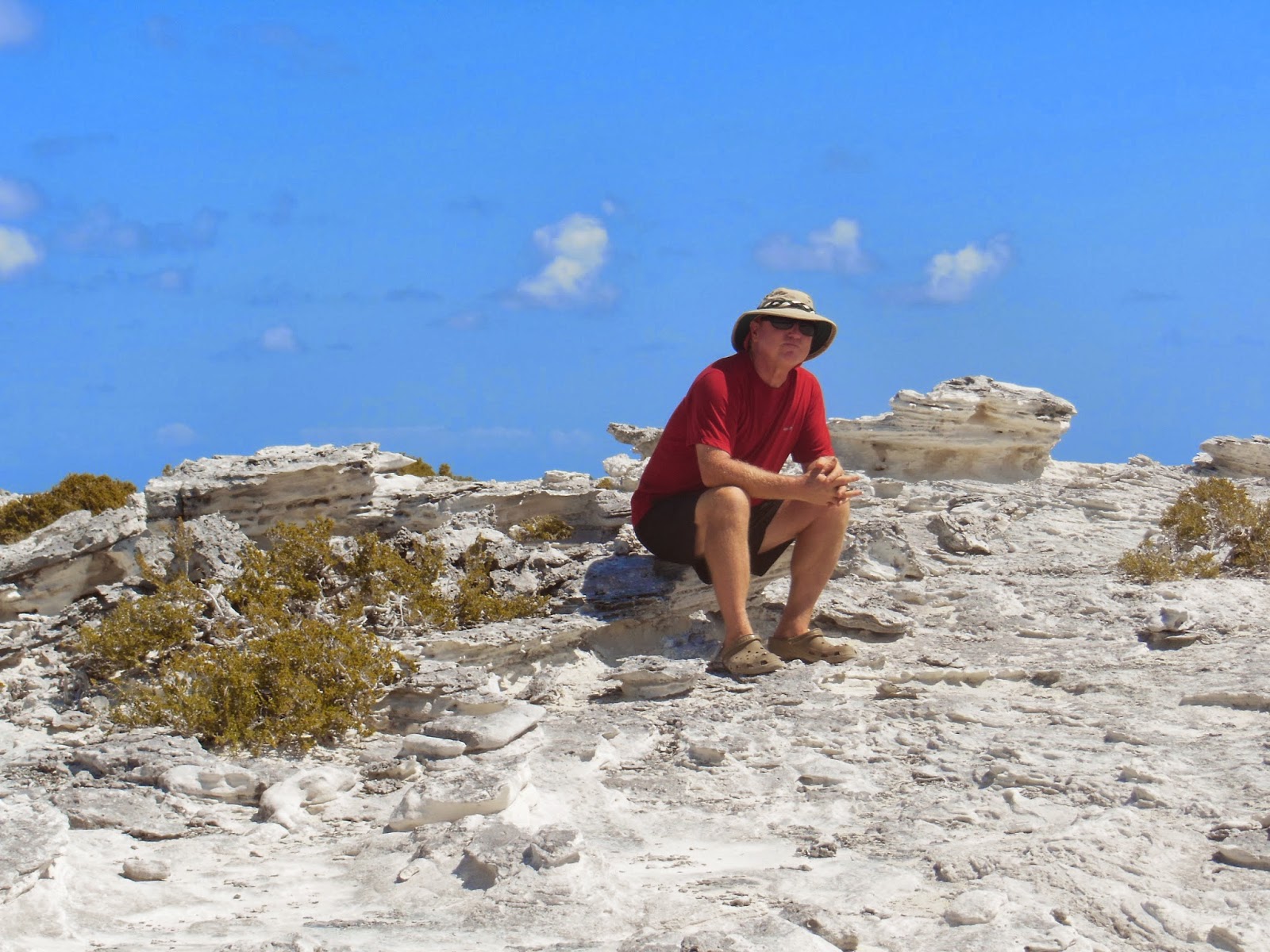 One thing about the Bahamas, the variation in the landscape between the eastern and western shores of the Exumas is astounding.  Pictured above are views from Great Guana Cay.  The first photo is taken overlooking the tranquil shallow waters of the Exuma Bank. This scene is typical of the western shoreline of the islands when the prevailing easterlies are blowing.
Within walking distance, photos two and three are taken of the eastern side of the island - the deep water Exuma Sound side.  Rugged sandstone cliffs, often worn by years of wind and water dominate the landscape.  The rocky shorelines are no less spectacular than the views of the Banks side but here the spectacular views are due in large part to the on-going battle between land and weather.
Truly amazing.
The Admiral
Posted by Captain Dave and Admiral Joanne at 7:12 AM No comments: 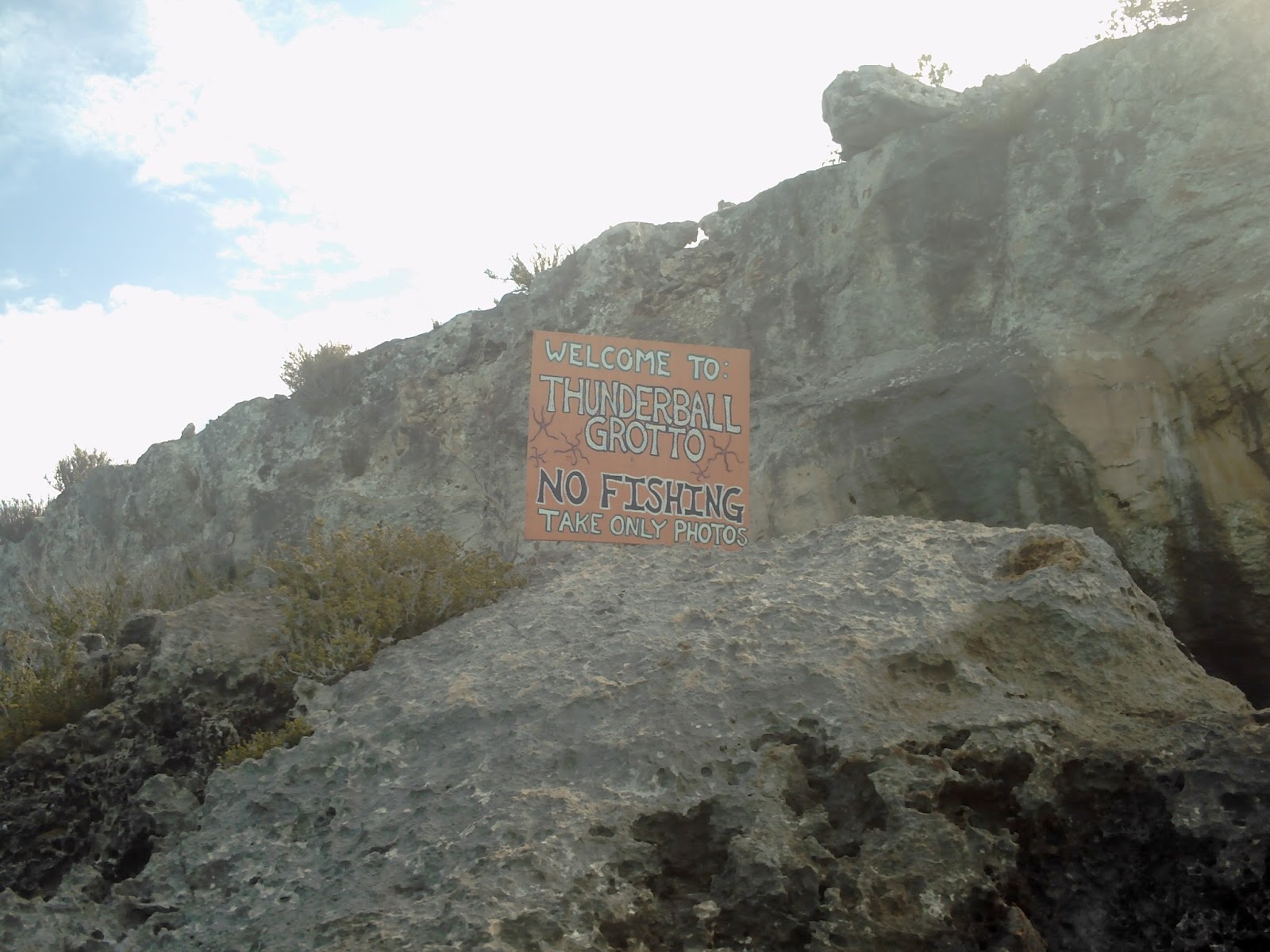 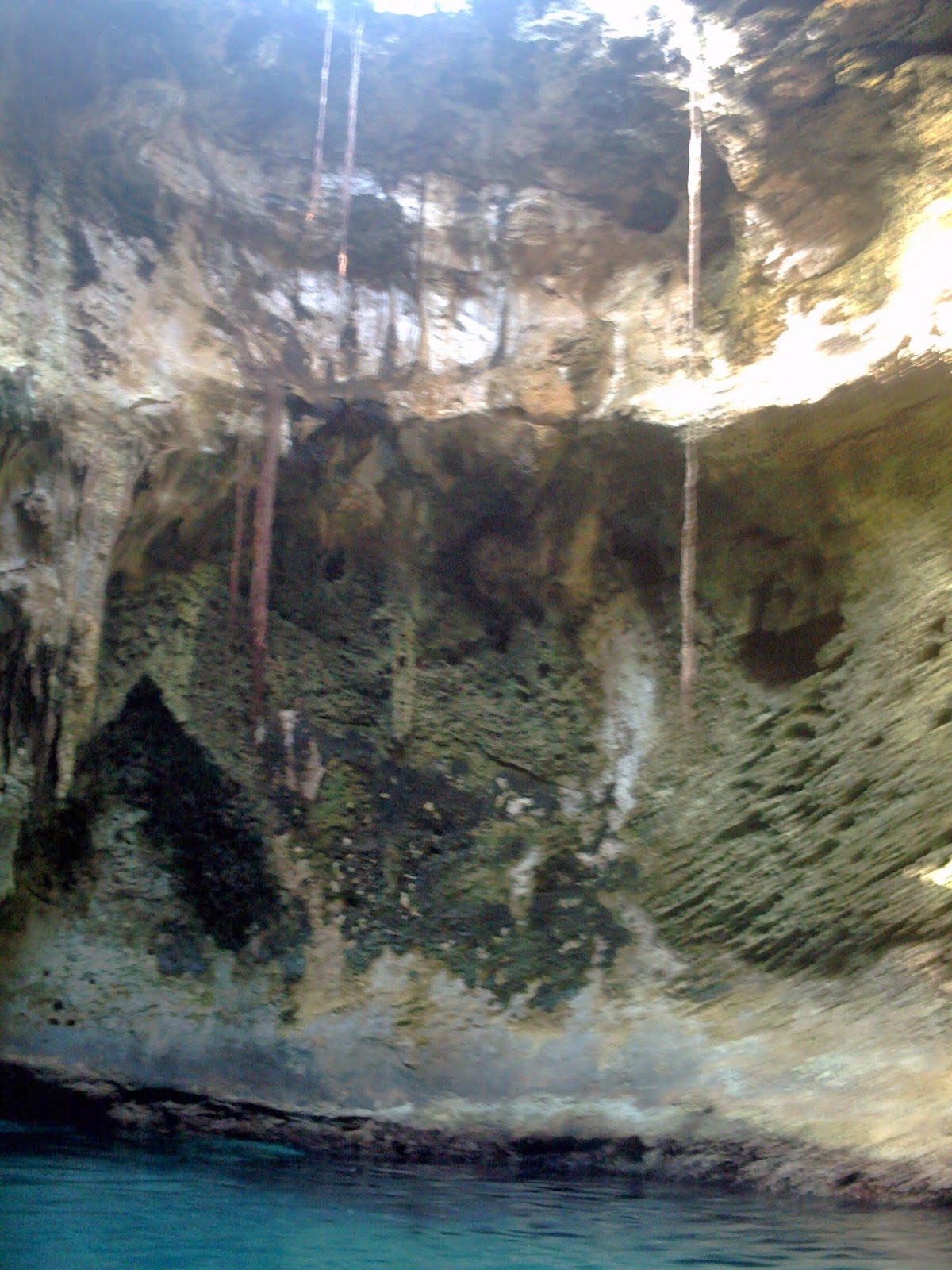 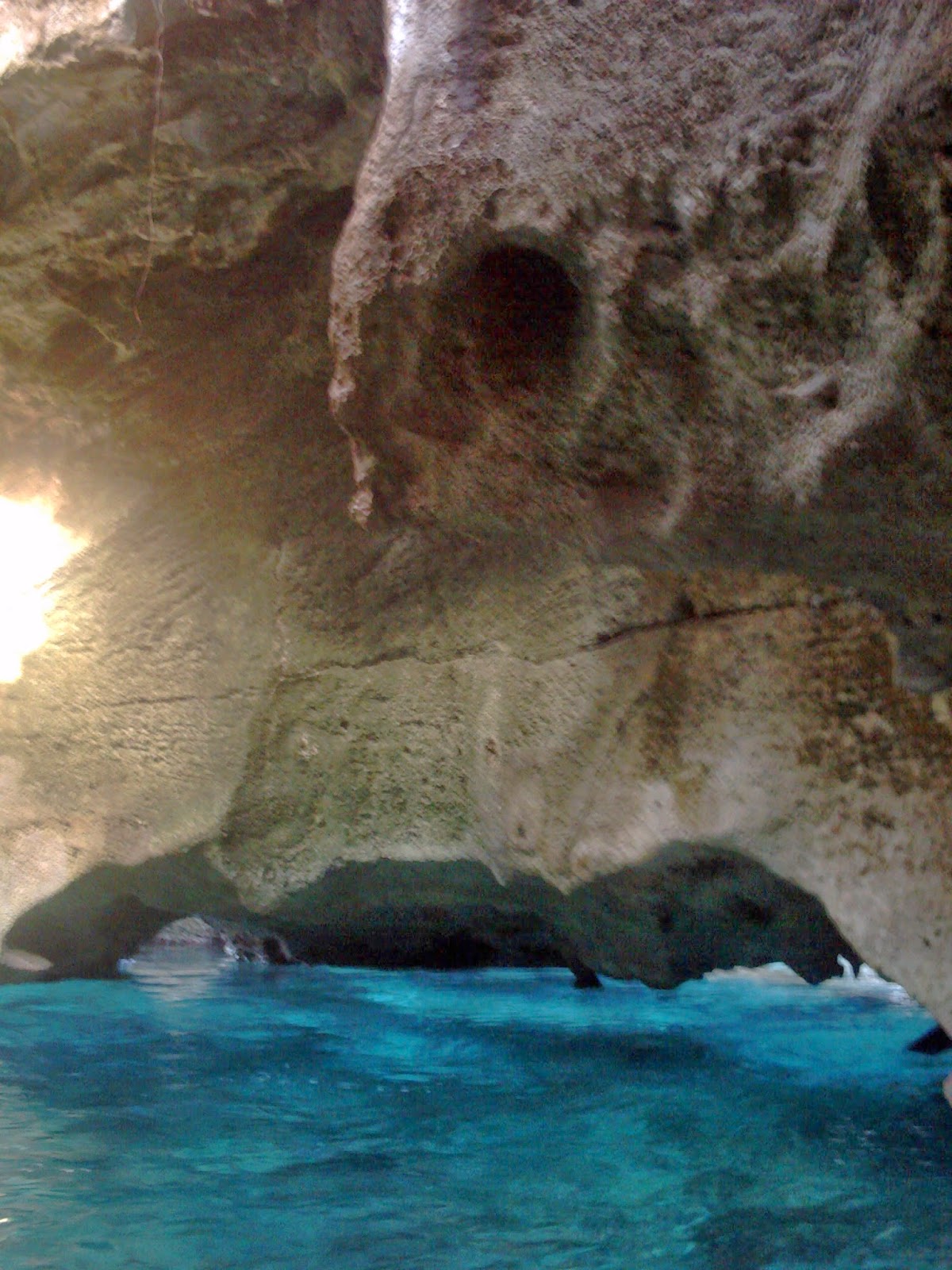 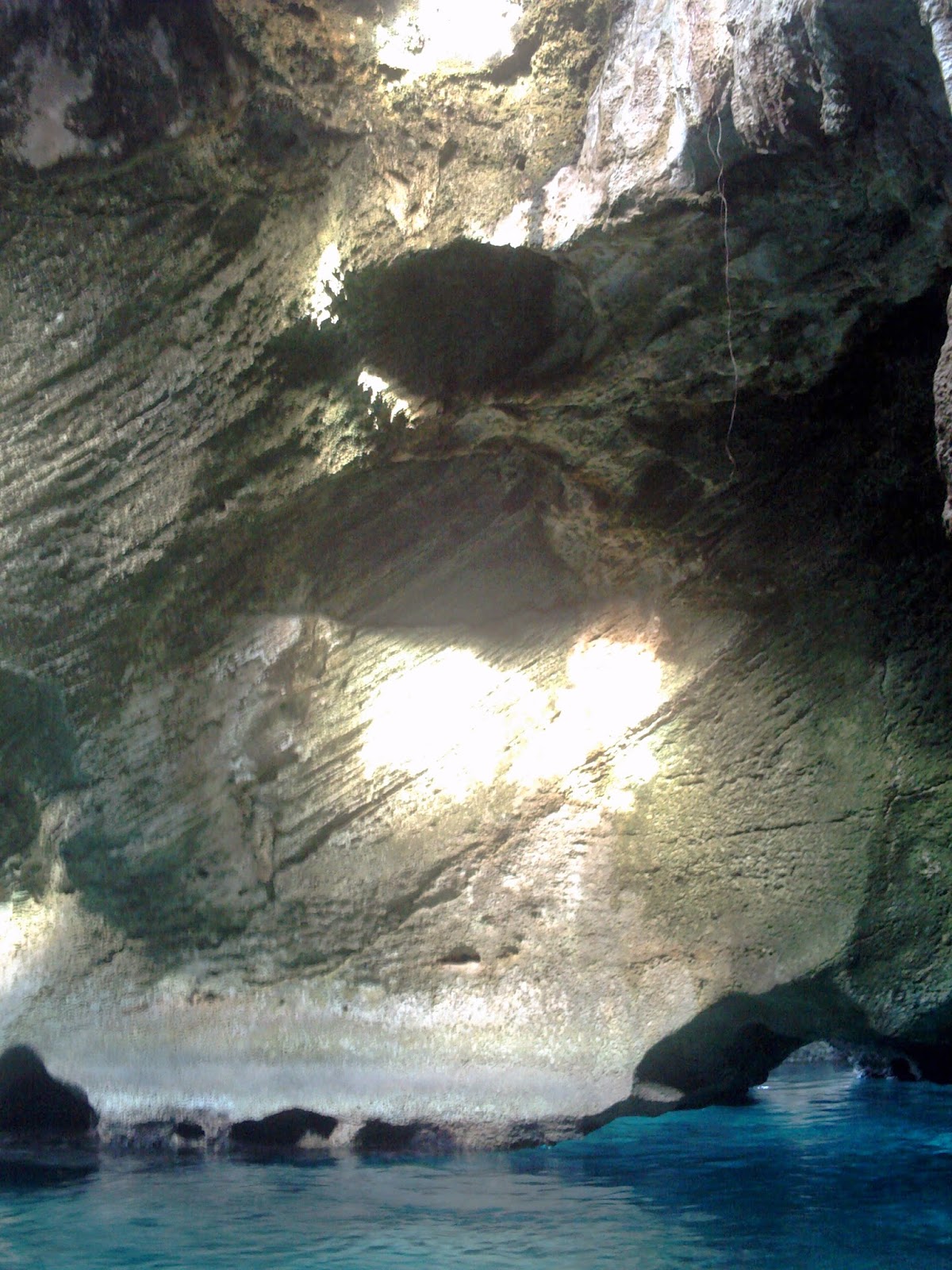 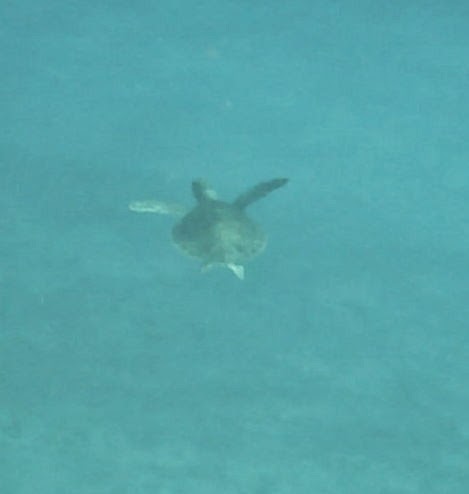 At Staniel Cay, we explored the Thunderball Grotto.  So named as it is the underwater cave where scenes from the 007 film Thunderball was filmed.   Both above and below the waterline the grotto is amazing.  Unfortunately, with the lighting my underwater shots did not come out.
However, a shot of a lone sea turtle I spotted outside the cave is not too bad.
The Admiral
﻿
﻿

Posted by Captain Dave and Admiral Joanne at 9:18 AM No comments: 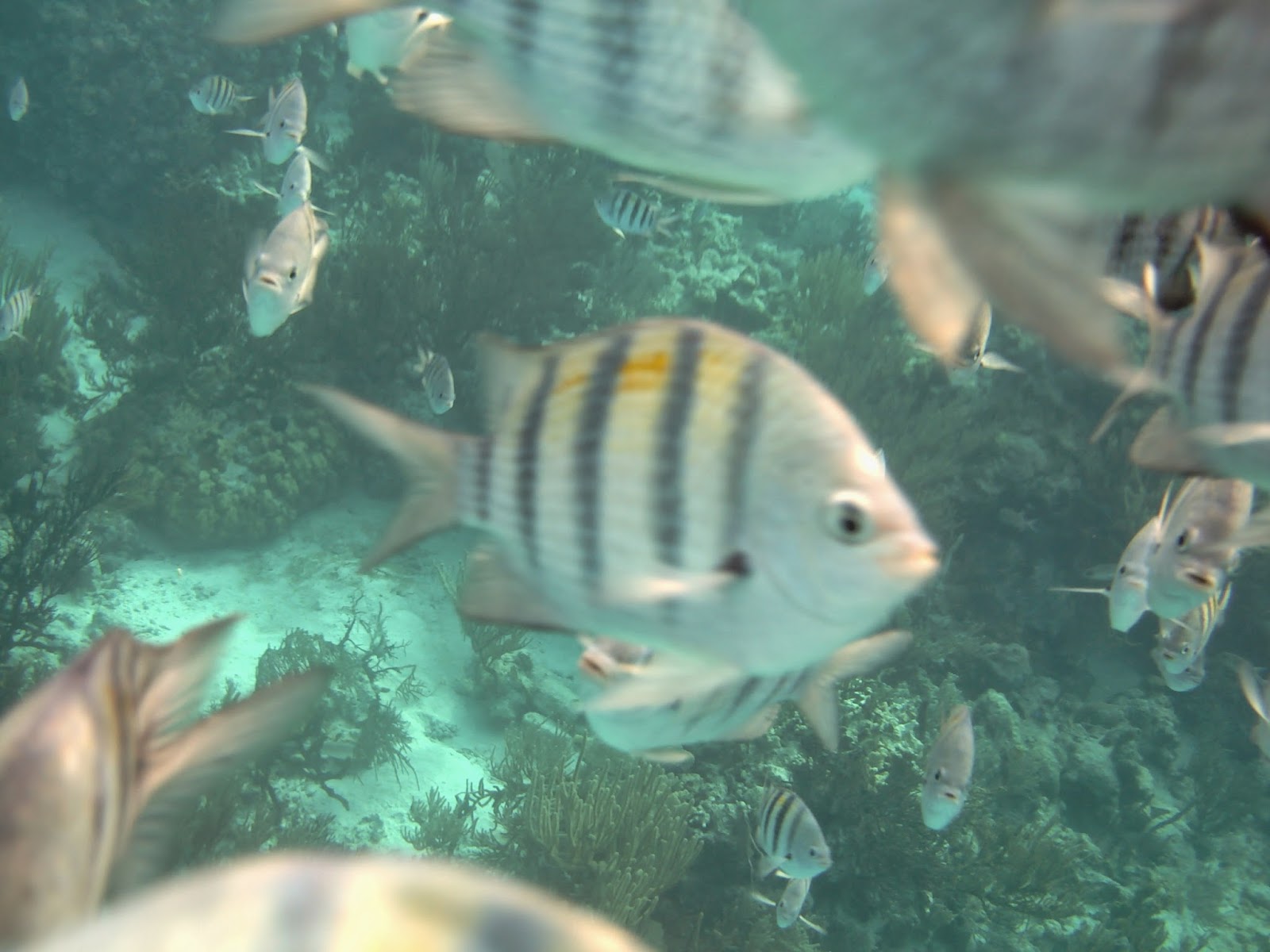 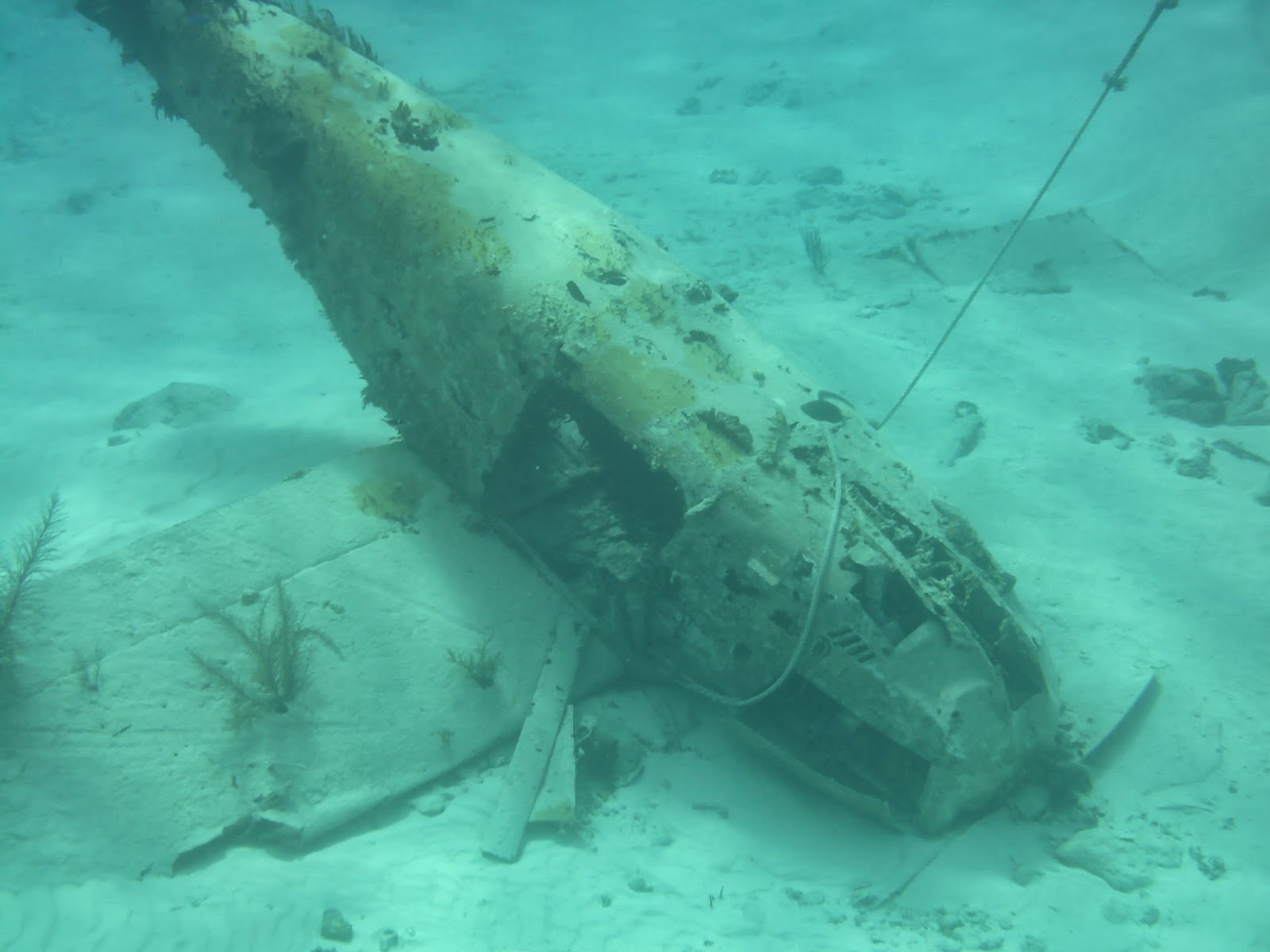 It was pretty apparent that visitors had been feeding the fish at the Seaquarium.  The minute we entered the water we were surrounded by small fish hoping we had brought some corn for them to nibble on.
After enjoying the splendor of the Seaquarium, we dinghied over to a nearby plane crash and explored its surroundings.
The Admiral
﻿
Posted by Captain Dave and Admiral Joanne at 8:38 AM No comments: 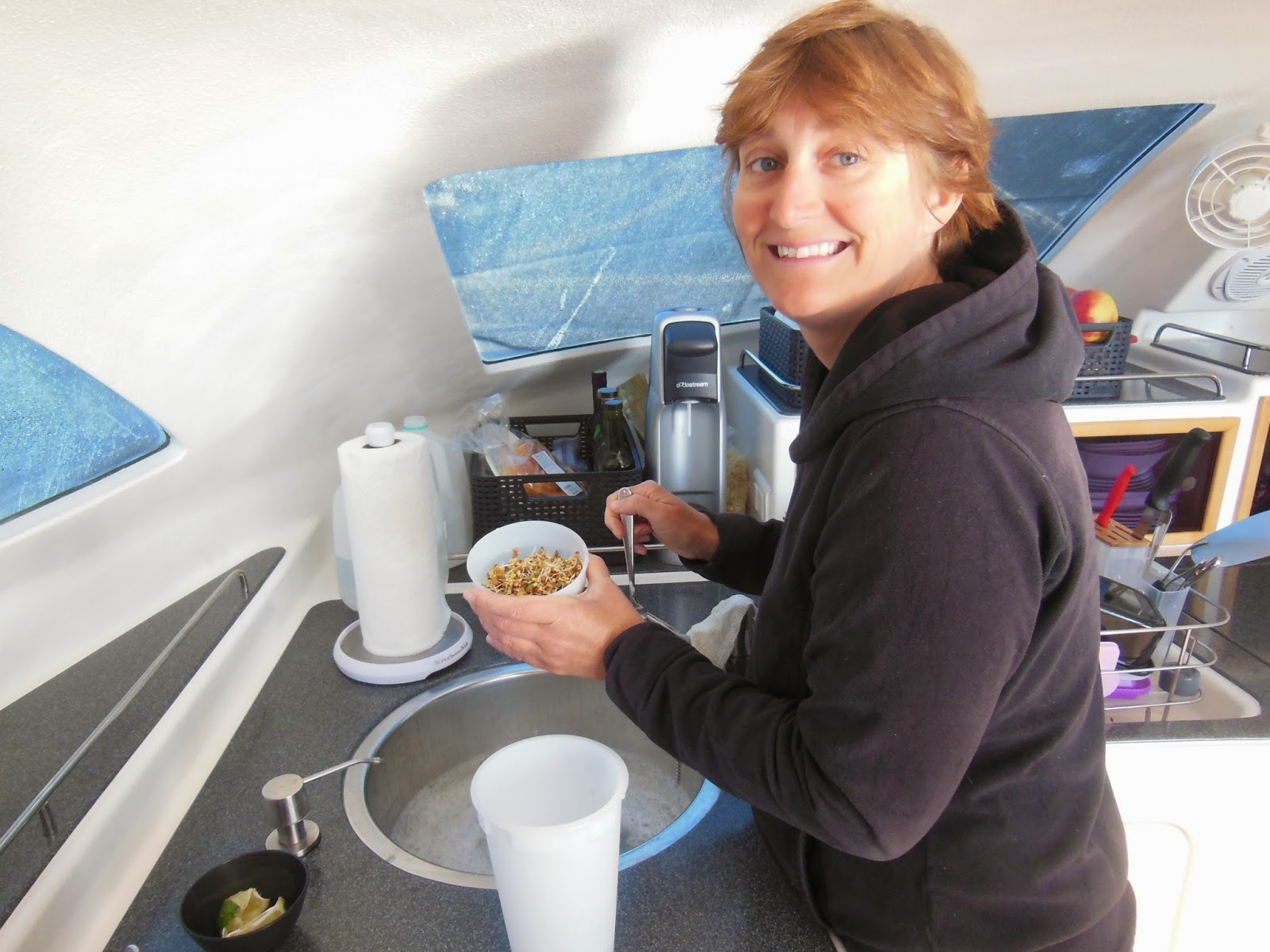 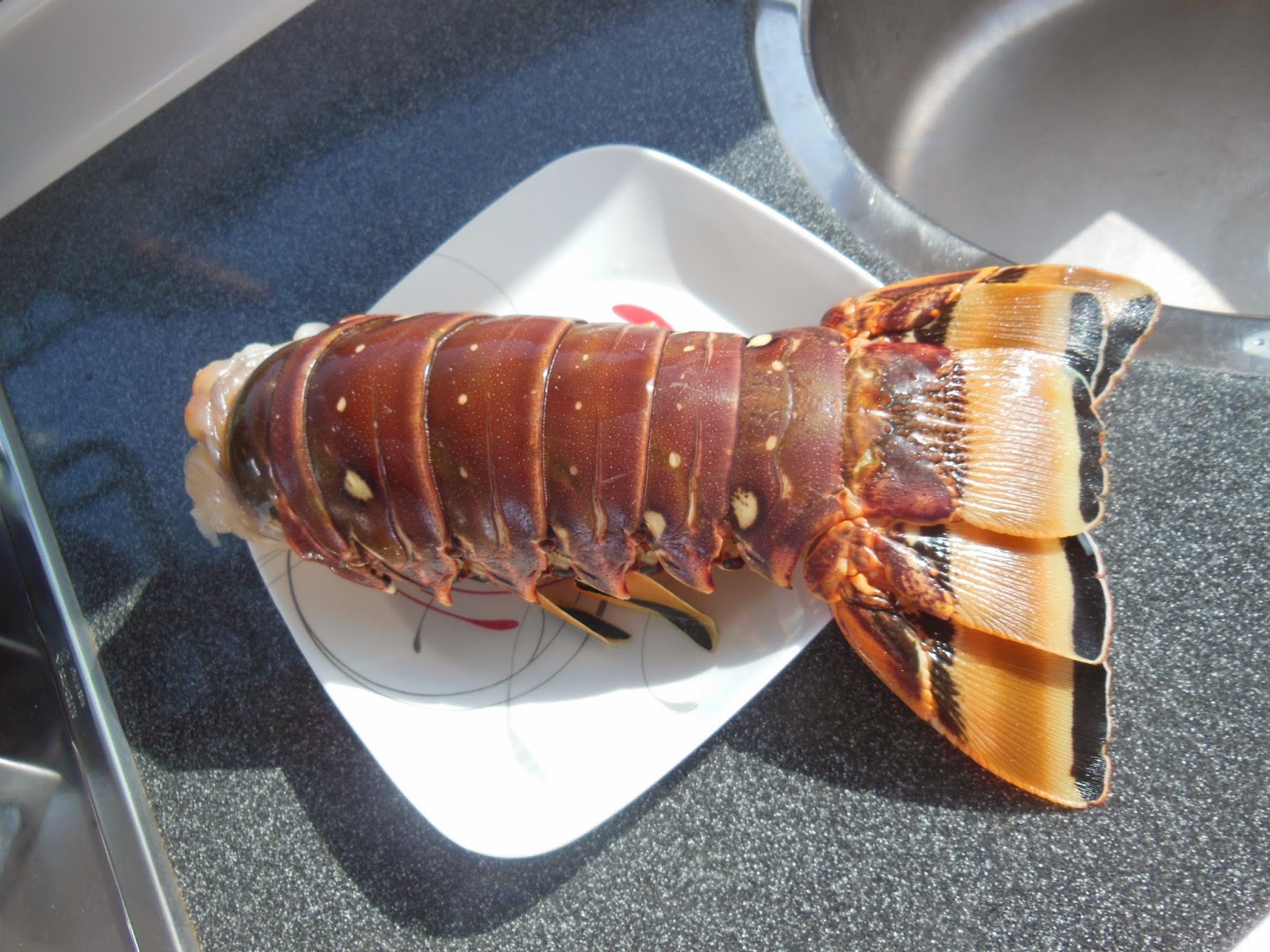 Weather has continued to plague our stay in the Bahamas this season.  While we haven't seen storms to the extent of what we experienced outside of Nassau, changing conditions have had us playing hide and seek amongst the island anchorages.  ﻿
On board, we are enjoying our new toy this season.  Compliments of Nancy, we now have a sprouter on board and have been enjoying fresh sprouts.  In fact we've enjoyed the addition so much that we created a second makeshift sprouter to ensure we have a continual supply on hand.

From under the sea, we haven't caught anything since our mahi just before Nassau.  We were, however, approached by a fisherman who offered us a huge lobster with an 11 inch tail for $25.  I wish I had taken a picture of him before we separated the tail from the body - he was huge!

The Admiral
Posted by Captain Dave and Admiral Joanne at 5:33 AM No comments:

The Calm after the Storm ... 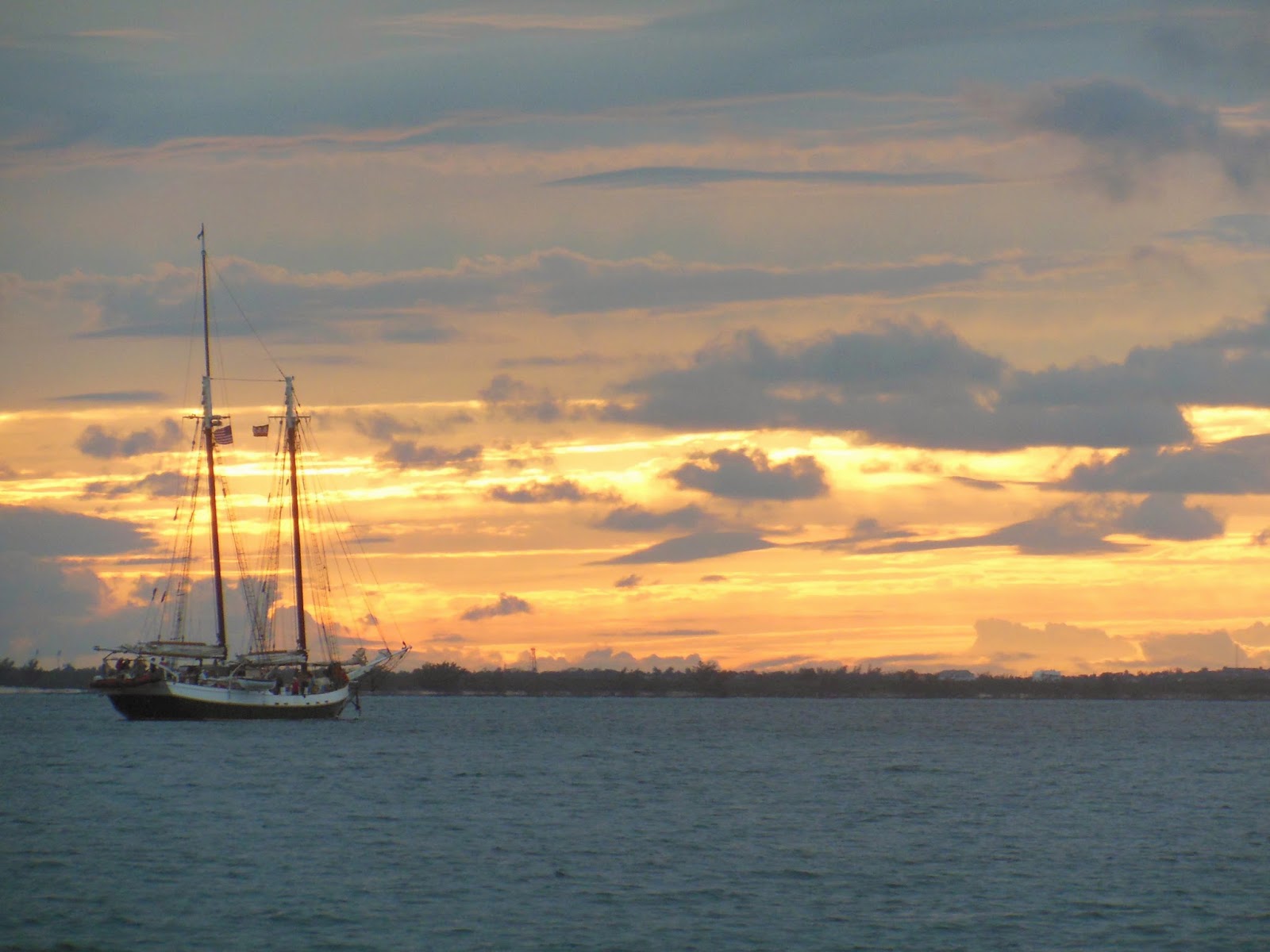 It was an 'Oh Shit' morning.  We had anchored on the south side of Rose Island the day before seeking protection from the north winds.  Some adverse weather was a possibility with some squalls, but oh my what would come.

It was 5:35 am.  After a peaceful night at anchor we bolted out of bed as the peace was overcome by wind and rain.  On deck the mild north winds had become a violent 35 knots sustained out of the south.  Rain poured from the sky making it impossible to see the lights of Nassau despite their being just 3 miles away.  Waves had built instantly and we found ourselves rolling over 3-4 footers.  Our stern was now pointed directly into the island's rocky shoreline.  Fortunately, the anchor adapted to the 180 degree shift and held us at bay.

In the darkness we watched the anchor lights of the 5 boats who had opted to cluster together just east of our location and we were thankful we had opted to put some distance between us.  We saw as one of the boats drug anchor towards the shoreline as the Captain and crew fought to raise the hook and move themselves from harms way.

The beating went on for 45 minutes.  We watched the chart plotter and shoreline making sure our position remained secure.  It was just about this time that I decided we were not in a squall.  This was something much more.  After all squalls are short bursts of energy that fade rather quickly - this was anything but.

Then the wind shifted to the west and started to intensify.  The wind indicator started climbing - 35 knots became 40, then 43, 48 and finally broke 50 knots.  Dave and I just starred at each other.  He quickly started the engines and began motoring into the wind trying to take some of the load off the anchor.  The wind in the rigging howled.  We watched. We waited.  The winds began to clock back to the north.  Finally, an hour and a half into the storm weather began to abate and we were thankful when the wind finally dropped to 30.

Later that day we dove the anchor curious to see what the sands would tell us.  Despite all the wind shifts, the Rocna made one adjustment and moved about 10 foot before reseating itself in the sands.   Thank heaven for good ground tackle.