I know I am behind with all my postings. My apologies. I did, however, want to let you all know that Dave and I will be out of cell phone and internet connection range for the next week. We appear to finally (yes finally!!!) have a good weather window so we are heading to the Dry Tortugas.

I will, of course, finish posting Nancy and Tim's adventures onboard Tropical Breeze once we return as well as, hopefully, some great photos of Fort Jefferson and the Tortugas National Park. 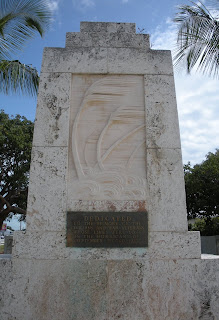 Since we so rarely have a car these days, we thought we'd run a few errands and take a drive up to the Upper Keys.
Despite several previous trips thru Islamorada, we had never stopped at the Hurricane monument. To understand the significance of the Hurricane monument you must first understand a bit of the Florida Keys history. In the early 1900's Henry Flagler built a railroad from the Florida mainland through the Florida Keys. This railroad was the first connection of the Keys to the mainland of Florida and was a very significant achievement for its time. In the 1920's construction of the Overseas Highway began. In many cases the highway was built over the top of the existing railroad bridges. Much of this construction was completed by WWI veterans who, after returning from the war, were in need of work. Many of the veterans remained in the Florida Keys following the completion of the Overseas Highway to support maintenance of the bridges.
In September 1935 the Florida Keys experienced their first known hurricane with winds in 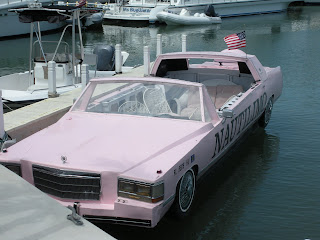 excess of 200 mph. The storm devasted the Florida Keys, destroyed many of the bridges and took many of the veterans as casualties. The Hurricane monument was erected in memory of those lost on the fateful September day.
What would a day of sightseeing be without food??? We lunched at the Lorelei - one of our favorite open air bar/restaurants in the area. The music is always fun and the food always good but we were further entertained by the NautiLimo, a floating pink Cadillac we found floating on the docks. One thing is certain - you never know what you will find while in the Florida Keys. 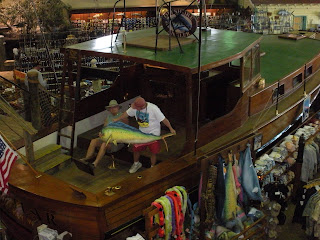 We had to, of course, make a stop at the best fishing store in the area, the World Wide Sportsman. The boys decided to show off a bit of fishing finesse of their own and boarded the replica of Ernest Hemingway's fishing boat which sits in the center of the store and managed to reel in (no reel involved) a stuffed mahi mahi. Impressed? Me neither. =)
The Admiral
3/21/09
Posted by Captain Dave and Admiral Joanne at 12:03 PM No comments: Nancy and Tim came bearing gifts from niece Jacquelyn!!! For Captain Dave a new pair of red shorts to replace the pair that we had to reitre. As you can see Dave is delighted with the his new attire and looks like he's ready to party.
Thanks Jacquelyn!!!
The Admiral
3/21/09
Posted by Captain Dave and Admiral Joanne at 11:32 AM No comments: 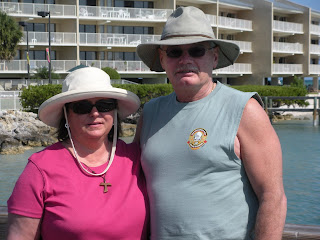 Nancy, Dave's sister, and Tim escaped the chilly Michigan winter and have joined us for a week of fun in the Florida Keys. Weather here is expected to be warm to downright hot while they are here but the winds are what may hinder our vacationer's fun.
Stay tuned.
The Admiral
3/20/09
Posted by Captain Dave and Admiral Joanne at 11:26 AM No comments: 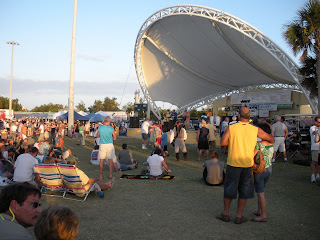 You know the old saying seafood and eat it. Well there was plenty of that, as well as music, at the Marathon Seafood Festival. The festival featured lobster, mahi mahi, stone crab, conch chowder, conch fritters and more. What could be better?! 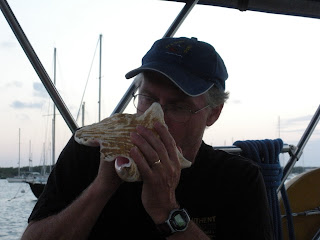 We anticipate leaving Marathon in the next week so I suppose we should share with you one of the Marathon traditions that we have enjoyed during our stay. Each evening at sunset many of the boaters in the harbor (for which there are over 200 boats) blow their conch shells at sunset. It acknowledges the end of another glorious Florida Keys day and another beautiful sunset.
The photo here is our friend Dave blowing his conch shell as we enjoy a sundowner happy hour on board their boat Tiffany Rose. Thanks Dave, Shirley and Christopher.
The Admiral
3/12/09
Posted by Captain Dave and Admiral Joanne at 7:45 AM No comments:

The Fate of the Red Shorts... 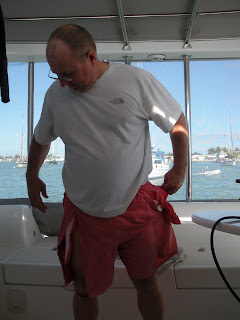 Very very few of you will understand this post so perhaps a bit history is necessary. Several years ago, Dave and I went on vacation with his sister's family. Since we were headed to the tropics Dave packed only shorts and on arriving we realized the only color shorts packed were red. So everyday became red shorts day and the mantra that lives on whenever Dave wears red shorts is.....
Oh it's Friday so it must be red shorts day.....
or Oh it's shopping day so it must be red shorts day....
and so on.
Well at least one pair of Dave's red shorts have taken a beating this trip. They fell victim to an over-clorinated jacuzzi in Stuart and have begun to fall apart since. Dave hung onto them as long as possible but it became inevitable that the red (now pink from clorine) shorts had to go. So with a reluctant farwell Dave finally retired them to the dumpster drawer. Fortunately, he has other red shorts with which to continue the tradition. 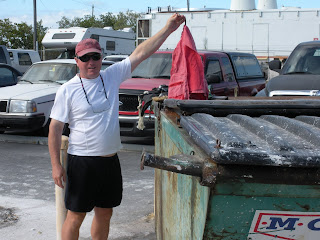 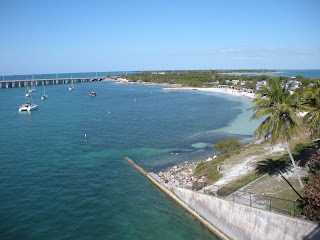 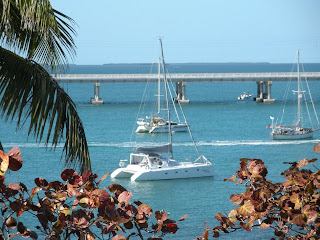 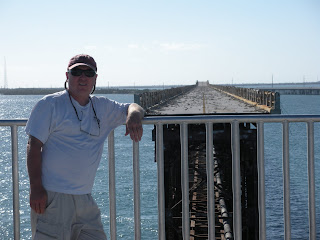 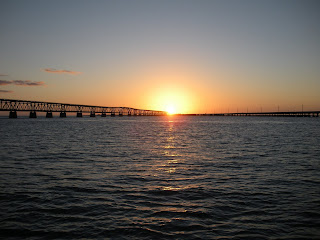 With more family expected in mid-March, Dave and I didn't want to stray too far from Marathon. We did, however, take a trip to Bahia Honda - 14 miles from Marathon (by sea). It was an enjoyable sail and would have been near perfect if the fishing lines Dave was trolling hooked any fish. Oh well, maybe next time.
Bahia Honda is a Florida State Park most noted for the old Bahia Honda Bridge which is in the Historic Register. The bridge was part of the original Henry Flagler railway which went down to the Keys but was largely destroyed by the 1935 hurricane.
Today, the park features a hike to the bridge, great views, swimming and snorkeling. We anchored in the park overnight and then sailed back to our home port of Marathon.
The Admiral
3/9/09-3/10/09
Posted by Captain Dave and Admiral Joanne at 6:14 AM No comments: 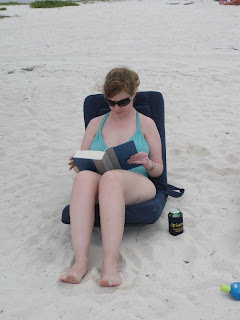 The balance of Jacquelyn's vacation time was spent being seriously lazy. Beach, books and boating pretty much sums up her afternoons. As for Happy Hour, the word beer pretty much describes it. Rough vacation!

And no, Nancy, we refuse to be held responsible for the "sunburn" incident! 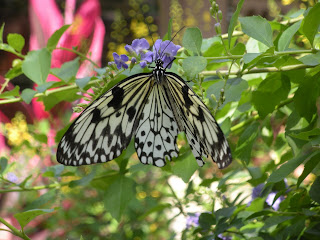 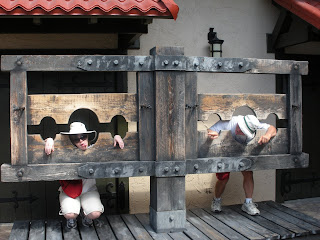 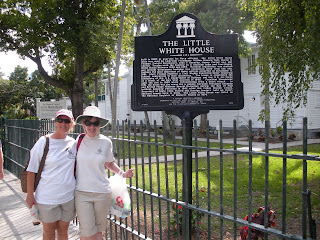 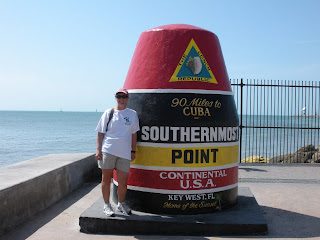 With the Nautical Flea Market behind us we could look ahead to some serious Keys exploring. So we headed off for a day in Key West.

Our first stop was the Key West Butterfly House. None of us had been to a Butterfly House before so we didn't know what to expect. The house was beautiful with flowers and foliage, a pond, fish, turtles, birds and, of course, lots of varieties of butterflies. Blues, pinks, oranges, yellows, browns - I can't name all the colors the butterflies portrayed - but it was lovely.
We moved from peace and serenity to crime and chaos with the Pirate Soul Museum. Of course, Dave and Jacquelyn had to compete for the craziest looking pirate in the stocks. Not sure which looked nuttier - I had to call it a draw.
The balance of the day we took in Duval Street and, of course, made a stop at the Dairy Queen. For after a day of adventure with these pirates what would be better than a little ice cream.
The Admiral
2/22/09
Posted by Captain Dave and Admiral Joanne at 9:59 AM No comments: 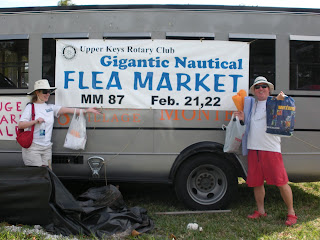 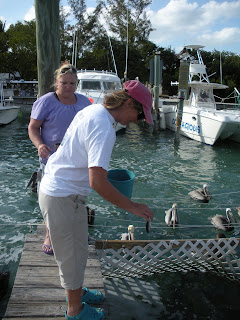 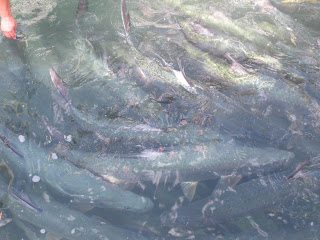 One would think that with Jacquelyn visiting that we would make her first full day in the Keys something she would want to do. Think again! It just so happened that her arrival coincided with the Islamorada GIGANTIC Nautical Flea Market. Certainly, we couldn't expect the Captain to miss that!!
So off we went. I fully expected the flea market to be a disappointing 3-4 stalls and not worth the trip. I, as would Jacquelyn, be delightfully surprised. The flea market had boats and gear for the sailing enthusiast but also plenty of jewelry, art and more for those less interested in the sea. By the time we all called the flea market quits each of us had bought something. It was quite fun.
We lunched at Lorlei and enjoyed the open air atmosphere and the music. Then is was a stop at Robbie's to take in the tarpon feeding. Ok, a bit odd I know but I was curious to see how big they were and how many. Jacquelyn and I were shocked at the size and quantity of fish. Many were four foot long or better. We fed the fish and even were attacked by pelicans who felt slighted that all the food was going to the fishes and none to them.
Overall, a great first day I'd say. Next stop - Key West (Again).
The Admiral
2/21/09
Posted by Captain Dave and Admiral Joanne at 10:09 AM No comments: